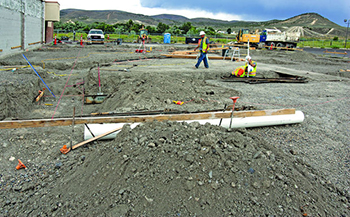 The expansion project has two parts being built at the same time to save on costs. The first part includes expanding the existing women’s cellblocks to include space for more beds and additional bathrooms. Last year, the Nevada Health Department cited the jail for not having enough bathrooms for the female inmates, requiring the facility to upgrade to an 8-1, women-to-toilet ratio.

The second part of the project is a two-story, 84-bed facility, which will help reduce crowding in a jail that has faced overcrowding issues in recent years. The construction of the addition is masonry and structural steel, according to Jennifer Back, project manager and estimator for Ormaza Construction Inc.

“The main goal and purpose of the project is to create additional cell space for inmates,” Back said. “Elko has seen an increase in population due to job openings in the mining and industrial fields. With this comes the demand for more county- and city-owned facilities.”

The jail currently has an official capacity of 120, but that’s only if inmates are precisely sorted based on male/female, sentenced/not sentenced and misdemeanor/felony categories, Undersheriff Clair Morris told the Elko Daily Free Press. However, he said the capacity is usually closer to 100 because the jail never has the exact amount of people in each category. The jail currently averages between 130 and 140 inmates per day.

The jail has already tried ways to reduce the inmate population, such as transporting inmates to other jails in the state and releasing inmates with non-violent misdemeanors that have scheduled court dates. However, more beds have become a necessity, reported the Elko Daily Free Press.

As part of the project, the jail’s communication system will also be updated to help correctional officers with the additional inmates. The facility currently has a 40-1, inmates-to-deputy ratio, and the advanced technology will help with security. The Elko County Commission also approved hiring three more correctional officers to staff the addition. They will begin the training and certification process in January.

Ormaza Construction Inc. has a 300-day construction schedule, and the entire expansion is scheduled for completion by summer 2015.

“The main challenge is trying to compete with cold weather. Although we have not seen many cold days, we would like to get the masonry and roof completed before the weather starts changing,” Back said. “Any time masonry is involved in a project, there is a lot of coordination to be managed between sub-contractors. Constant communication and scheduling is the best way to coordinate these challenges.”

This is Ormaza Construction’s first time constructing a jail or detention facility, Back said, so the project team has had to make changes in the way they operate in the field and on a management level.

“When building a specialty facility, there is additional coordination with owners and the design team,” she said. “Any time a construction company has the opportunity to take on a new construction type, it is beneficial to the company and allows a company to expand its services.”