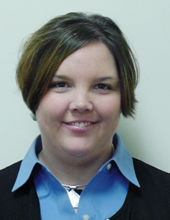 Abby McIntire was recently promoted to deputy warden at Blackburn Correctional Complex in Lexington, Ky. McIntire began her career in 1998 as a correctional officer at the Kentucky State Reformatory. Since then, she has served as a classification and treatment officer, unit administrator I, unit administrator II and program administrator at various state facilities. McIntire was one of the original master trainers for the department’s case management tool and also served as an institutional trainer for the offender management system. In 2014 she earned her certification as an auditor for the Prison Rape Elimination Act. McIntire is a member of Kentucky Council on Crime and Delinquency, a 1998 graduate of Murray State University and a 2012 graduate of the Commissioner’s Executive Leadership Program.