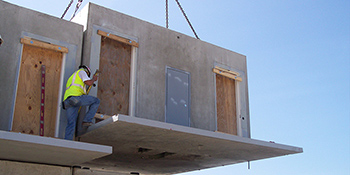 BUNNELL, Fla. — Construction on Flagler County’s new inmate housing facility, located in Bunnell, reached a significant milestone earlier this month as crews began the installation of 86 new prefabricated cells. The installation marks the jail expansion’s halfway point and the end of the first of two phases of construction.

The jail expansion includes a single-level, octagon-shaped facility that will add 272 beds, providing more housing for male inmates at the Flagler County Sheriff’s Office. The new expansion will also contain four areas for inmates to meet with legal counsel, a centrally located control center and an outdoor recreation area. Communication between the jail and the nearby courthouse will be improved with the addition of a closed-circuit video conferencing system.

The existing Flagler County Detention Facility adjacent to the expansion will serve as the new female-only wing. This facility will undergo a series of upgrades, rather than being demolished and replaced by new administrative and women’s areas.

Built in 1991, the existing jail was intended to accommodate just 132 inmates, a number the county today surpasses on a regular basis. Flagler County Sheriff Jim Manfre told the Daytona Beach News-Journal that the facility averages 150 inmates.

Work on the new 12-pod facility is likely to wrap up by early February 2016, while Phase II renovations to the existing jail will continue through June 2016. Capacity will exceed 400 inmates when all work is complete.

The design will include 62, two-person precast cells and 24 cells designed to contain four inmates each — all constructed by Tindall Corporation of Conley, Ga. — as well as prefabricated shower stalls. The prefabricated cells helped trim approximately $3 million off the total project cost. They will also allow the county to more easily expand (should the need arise), offer added security and help to speed the construction process.

Keeping costs low was important to the community and county commissioners, who have committed to a maximum price of $17.9 million. Funding for the project was provided via revenues from a half-cent tax levied in November 2012.

Speaking with the Daytona Beach News-Journal in February, Sheriff Manfre noted that the existing jail was designed nearly 25 years ago when the county was home to just 20,000 residents. Today, that number has exceeded 100,000, and some estimates have put the population at upwards of 150,000 by 2030. This sharp uptick has put a squeeze on correctional and justice facilities, and the sheriff’s office is concerned about the potential safety risks posed by overcrowding and lack of proper inmate segregation and classification. However, the current design, which includes improved surveillance and sight lines, should see the county through for at least the next three decades.

The project was designed by CRA Architects of Tallahassee, Fla., and is being built by Allstate Construction of Jacksonville, Fla. CRA developed the design in response to the compact site. The original design included a square or rectangular facility, but architects found the octagon shape would further conserve space and improve heating and cooling efficiency. Eventually, the site could hold two additional pods, boosting the total capacity to 800 beds.