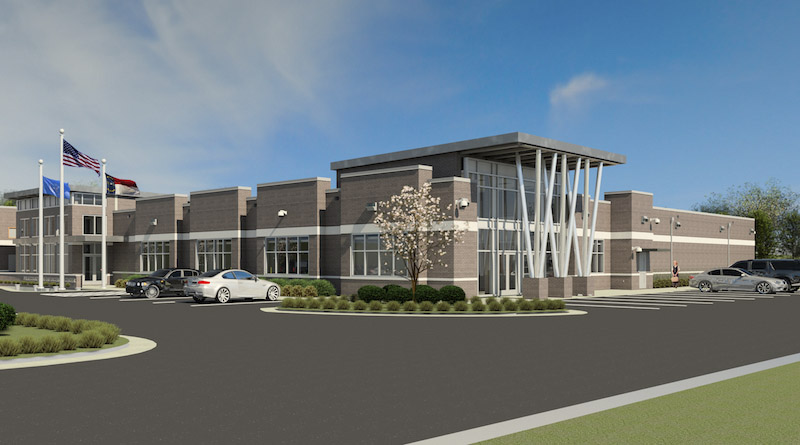 COLUMBUS, N.C. — Construction on Polk County’s new law enforcement center in Columbus is currently on track for a December 2017 completion. The Polk County facility includes both a jail and a sheriff’s office with a training facility, crime lab and administration offices.

Hendersonville, N.C.-based Cooper Construction Company Inc. already began work at the jail site more than two months ago and demolished the previous buildings on the site in mid-February. Charlotte, N.C.-based Moseley Architects is serving as the architect on the project. The architecture firm is very familiar with designing new county jails in the state after designing facilities in Iredell County and Orange County.

The current Polk County jail was built in the early 1970s, and was considered to be too small from the get-go, according to Tryon Daily Bulletin. Before designing the facility, Moseley Architects conducted a study of the current jail and the future needs for the county. Based on findings from the study, the new jail is designed for 60 beds with room for both females and juveniles, which the current 25-bed facility does not include. As of now, the county is required to house females and juveniles in other counties. The current jail has also been considered functionally obsolete and has not met state guidelines for years, according to county officials.

In addition to the jail and sheriff’s office portions, the facility includes a kitchen and laundry area, enclosed vehicle sallyport, intake and booking area, medical suite, video visitation room and magistrate’s offices. The jail is being built on a 22-acre site that was also master planned for a future courthouse and other county buildings.

“The law enforcement and detention facility is located on a beautiful site overlooking the nearby mountains and will also serve as the location for a future replacement courthouse that is master planned on site,” said Dan Mace, AIA, LEED AP, vice president for Moseley Architects. “As such, the aesthetics of the design will somewhat dictate the future architecture of the campus. Unique design elements of the Polk County area were integrated into a contemporary solution that camouflages its detention function.”

“The building will serve the county for many years, utilizing one building as a ‘justice’ complex rather than just a jail,” said Cristin Cooper, marketing and HR director for Cooper Construction Company Inc. “For example, [the county] plans to have detention employees that will act as ‘booking’ officers. This will allow field officers to return to protecting the streets quickly.”