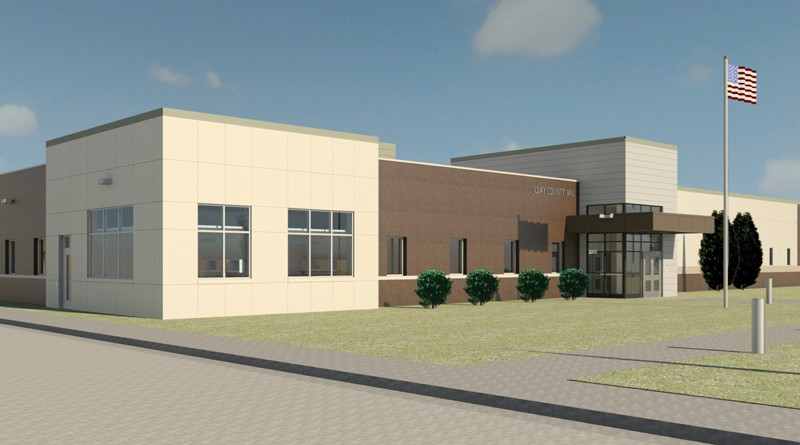 MOORHEAD, Minn. — Clay County, Minn., is in the midst of a significant correctional construction project. The county broke ground on the new 204-bed Clay County Joint Law Enforcement Center in Moorhead in May 2017. When complete, the facility will include core functions such as a laundry area, kitchen and enough extra space to accommodate two future housing pods and 120 additional inmates should the need arise.

While the project is just barely off the ground, it is already getting a lot of attention from the correctional and law enforcement communities. The big attraction: the facility’s planned 18-bed behavioral/mental health unit. The new unit will help meet a growing need for dedicated mental and behavioral health services. It will include single-bed cells clustered in units of four or five, and each unit will offer its own day area and program space. The units will be spread across two levels and will include sound barriers to alleviate noise and improve classification as well as include softer and less institutional furnishings.

“We’ve been contacted by [correctional officials] from all across the state because this is a relatively new idea,” said Clay County Jail Administrator Julie Savat. “It’s the way we have to do things in the future because there are not enough services on the outside, and [mentally ill individuals] are ending up in our jails.”

The behavioral/mental health unit was at the top of Savat’s wish list for the project, as the county has struggled to find mental health beds that appropriately accommodate inmate needs while also ensuring safety for staff and other inmates. In response to this growing need, the county formed a behavioral health subcommittee that was part of the jail design process.

Clay County worked with long-time design partner Klein McCarthy Architects of St. Louis Park, Minn., to complete the new jail design. The two entities first collaborated in 2006 when the firm was asked to deliver a jail design based on a feasibility study of the existing jail completed by Voorhis Associates Inc. of Lafayette, Colo. While lack of funding stalled that jail construction attempt, Savat said that Klein McCarthy Architects simply had to brush up its earlier design and make a few minor changes when the project finally became a reality. The firm also helped the county determine that the project (in its most recent iteration) would benefit from having a construction manager, and the county ultimately selected Construction Engineers of Grand Forks, N.D., for the project.

So what changed between 2006 and 2016? First, Savat said county leaders could no longer overlook the jail’s severe overcrowding or the associated costs, as the county now houses more inmates outside the county than within it.

The county has consistently been forced to house inmates in neighboring facilities since 2006. Savat estimates this has cost the county approximately $2.1 million over the past five years, and current projections show that in 2017 alone $1.3 million will be spent on housing inmates in other facilities.

The county’s existing 1960s-era, linear-style jail — the oldest operating jail in the state — was largely to blame for the overcrowding issue. The inefficient, staff-intensive facility does not offer direct supervision, and instead, staff must do rounds every 15 to 30 minutes. While the existing and still occupied facility has received security technology and software upgrades in recent years, the antiquated bars, steel design and lack of housing capacity continued to hold back progress.

In contrast, the new design will meet all current correctional standards and will offer both direct and indirect supervision. Savat’s wish list also included increased program areas for inmate education and rehabilitation. Instead of just one small classroom on the basement level that severely limits programming opportunities, as is currently the case, the new design includes centrally located program space as well as a dedicated program/multipurpose room attached to every housing unit. Here, Savat envisions holding chemical dependency and life skills classes as well as religious programs.