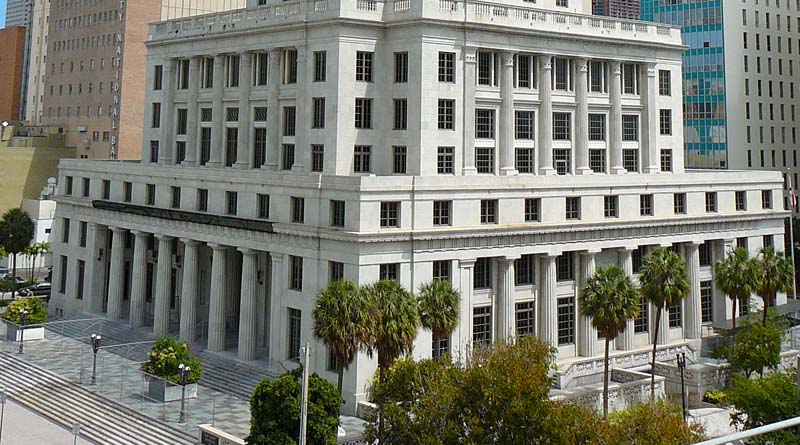 The new 600,000-square-foot downtown civil and probate courthouse will be built on a site across the street from historical Miami Dade County Courthouse that was completed in 1928. Photo Credit: Robert Syzmanski, Shutterstock.com

MIAMI—A developer is expected to be selected in September for the new Miami Dade County Courthouse project.

The downtown civil and probate courthouse will be built on a site on Flagler Street across from the 91-year-old current courthouse.

Formerly known as the Dade County Courthouse, this historic courthouse was constructed over four years from 1925 to 28. It stands 361 feet tall with 28 floors. When it was built, it was the tallest building in Miami and in Florida. In 1989, it was added to the U.S. National Register of Historic Places.

With construction slated to begin in July 2020, Miami-Dade County is seeking to partner with a private developer to build the new 600,000-square-foot courthouse. Lawyers and judges have insisted that the current courthouse is an unsafe and unhealthy building that needs to be replaced. There have been complaints of internal water damage, as well as mold and mildew. Efforts to replace this historical building have taken more than a decade.

This new project will be costly. Miami Mayor Carlos Gimenez recently warned city commissioners that the new courthouse will cost Miami-Dade County more than $1 billion in payments over the next three decades, straining budgets and possibly forcing service cuts in vital areas if taxes are not raised.

Additionally, this $1.2 billion estimate does not include environmental costs to address the soil and groundwater contamination issues.

In a memo from Mayor Gimenez to commissioners, he wrote that the county estimates it will have $38 million a year available for 30 years to pay for the courthouse, subject to annual escalations.

“This amount excludes an annual lease payment that must be made to the Department of Transportation and Public Works for the use of the project site,” the memo read. The first payment would most like come in the 2023-24 fiscal year.

While the project currently remains on schedule to begin next summer, Mayor Gimenez says construction is contingent on ongoing environmental test results.

“The impact of these environmental conditions on project costs and schedule require further evaluation.”

The mayor also added that because of this contamination, the county will require that the developer chosen will protect public health and worker safety in construction.