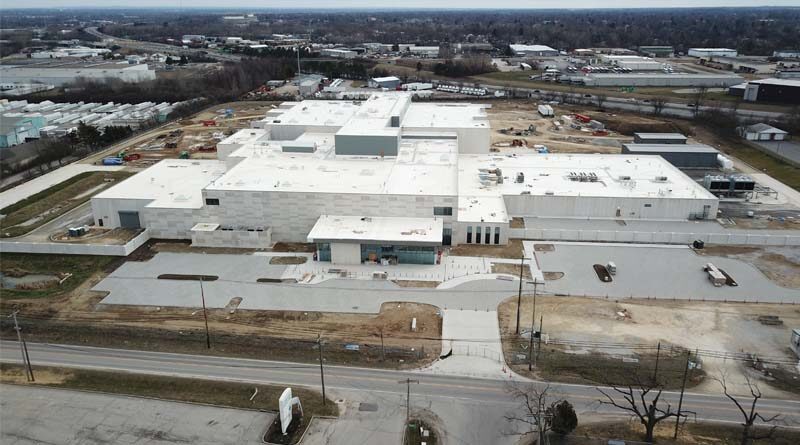 COLUMBUS, Ohio—Construction of a new $360 million Franklin County Jail in Columbus remains on track for the facility to open next year.

According to the Columbus Dispatch, officials hope to have the blueprints soon for an addition that will increase the number of inmate beds by another third. For the Franklin County Sheriff’s Office, the move couldn’t come soon enough, particularly with the office working to prevent COVID-19 infections of deputies and inmates.

“We certainly wish we had the ability to be in that facility today,” said Chief Deputy Geoffrey Stobart. “It would be truly perfect for this type of situation.”

The facility—being funded by a sales tax increase implemented in 2013—is one of two large-scale construction projects headed by the county. The other—a $37 million forensic science center and morgue on Frank Road south of downtown—is slated to open soon

Officials told local media that the plan is to close the decades-old downtown jail and relocate inmates from a newer lockup on Jackson Pike to the new Franklin County Corrections Center. Inmates are expected take up residence in the first section of the center in May 2021.

With the new jail designed for direct supervision, deputies will be stationed with groups of inmates in two-tiered pods that include cells, common areas, recreation and other space.

This setup allows deputies to see inmates at all times. Inmates will spend much of their time in their pods instead of being moved from room to room or outside the facility for medical, mental health and other services.

The first part of the new jail building—with 429,000 square feet and about 870 inmate beds—will be substantially completed by next February.

“The Construction Manager on this project is a joint venture between two construction companies—Gilbane and Smoot,” said Major Chad Thompson of the Franklin County Sheriff’s Office Correctional Operations Reorganizing for Excellence (C.O.R.E.) team.

“Our architect work is also a joint venture with DLZ having the lead and partnering with HDR. Eric Ratts with DLZ is the architect of record. Franklin County also hired the Pizzuti Company to fill the role of Owners Representative for this project.”
Preparing the new facility for occupancy and allowing deputies time to train before inmates are moved in will take months. In the meantime, the county is investing $1.2 million to revamp part of the Jackson Pike jail into pod areas similar to what will be in place at the new facility to allow deputies to begin preparing for the move.

Construction of a 166,000-square-foot, 432-bed addition is set to begin in early 2021, with completion slated for approximately two years later. Initial site work will begin this year.

The benefits this project will have on the community are enormous

“The community benefits almost immediately and holistically with how much safer the facility is for everyone inside the facility,” explained Thompson.

“Assaults, vandalism and other harmful activities are dramatically reduced saving tens of thousands of dollars a year. Along with being safer, this facility has purposefully concentrated on making classroom and meeting spaces readily available with the purpose to provide as many services to those who are incarcerated as possible.”

Additionally, Thompson said that having the space to deliver more programs such as anger management, life and parenting skills classes, and job readiness only go to strengthen the community by preparing those who have been incarcerated to be the most productive members of the community as possible.

“Our design also provides space for community volunteers to come in and begin making those personal connections with those who are currently incarcerated building and strengthening the support system they will need once released,” he explained.

“Staff satisfaction and morale are also huge benefits to the community. Having a staff that wants to come to work and who want to help make a difference in the lives of those community members who have been incarcerated is a powerful benefit to everyone.”

Sheriff Dallas Baldwin added that the current pandemic has helped accelerate preparations for the move to the new facility. Efforts to reduce the overall populations at the two jails have enabled his office to decrease the number of inmates at the downtown facility.

The layout of the new jail will ensure physical distancing of inmates and better areas when quarantines are needed.

“This crisis is actually a perfect example of why we’re building the new facility the way that we’re building it,” added Stobart. “It would be perfectly designed to handle a crisis like this.”