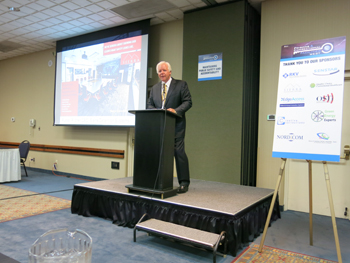 AURORA, Colo. — The Institute for Defense and Government Advancement (IDGA) recently held its second annual Prisons and Correctional Facilities West conference. This year the event was held in Aurora, right outside of Denver.

The two-day event was an informative and also interactive discussion with speakers and a select group of attendees. Pilcher raised a question to the audience on the final day asking, “What do correctional facilities of 2020 look like?” He was met with responses suggesting updated security technology and facilities that operate more effectively by relying on state-of-the-art equipment to track and monitor inmate movement around the facility.

The event also was a time to remember the late Tom Clements, former director of the Colorado Department of Corrections, who was scheduled to appear at the conference. Clements was murdered back in March of this year outside of his home in Monument, Colo. Alison Morgan, assistant director of finance for the Colorado DOC, spoke kindly and freely about Clements, her former boss, and his loving spirit and powerful vision for the future of Colorado’s department and the correctional industry in general.

Pilcher also presented Morgan with a donation on behalf of IDGA for Clements’ favorite charity, the Prison Fellowship Ministries.

“Tom was larger than life. And he had an unbelievable capacity to believe in the human being and believe in the offender. And both Tom and Lisa [Tom’s wife] believe in redemption and forgiveness,” explained Morgan in her speech.

Morgan explained her working relationship with Clements as being an honor, privilege and challenge, every day. She also explained that the Clements family is still very much a part of the Colorado DOC family.

“The Clements family has started to forgive,” said Morgan. “Tom believed in redemption and believed that offenders could change.”

The conference focused around innovation, the future and tending to the present issues of the industry, and Morgan reflected back on Clements’ vision saying, “Tom believed that if we created environments for inmates to change, then they would choose to change. He honestly believed in his heart and soul that a change could occur.”

As the rest of the conference went on, many speakers spoke about inmate populations shrinking, including Colorado’s. Ryan, Arizona’s director of corrections, also explained that facilities to help rehabilitate offenders are becoming popular in his state, including a community corrections center that was recently opened in Tucson, Ariz.

The conference even ended with a speech from a visiting professor from North Carolina Central University, Art Beeler, who explained the importance of lowering recidivism through reentry programs.

The attendees and speakers left the conference with knowledge from corrections officials across the country, and in Canada, as well as starting a popular dialogue on how to facilitate offenders now and in the future. The next conference will take place later this year, with more details to follow in the coming months. For more information about IDGA and other conferences they host, please visit www.idga.org.