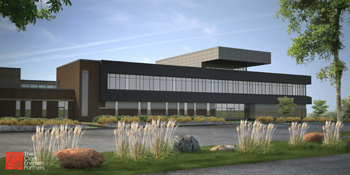 The 779-bed Lancaster County Adult Detention Facility (LCADF) was commemorated last week with a ribbon-cutting ceremony at which 300 members of the community toured the long awaited jail.

“One of the unique parts of the project was the ability to select a site that was large enough for future expansion beyond what the original program necessitated,” said Greg Newport, AIA, of Lincoln-based Clark Enersen Partners. “It was sort of a bonus to the affect that we had such a large site.”

The 37-acre site, about four miles from the original facility, is built in an area that supports future growth. Though it is not immediately needed, the project required the jail to be able to support a population of 1,000 inmates, Newport said.

“This site will allow the facility to really stay in this location without additional facilities being built off this location for probably anywhere for another 30 to 40 to 50 years,” Newport said.

According to Mike Thurber, director of corrections, there is no potential for growth at the current jail, as it is located in downtown Lincoln and state capital mandates restrict vertical expansion.

“It’s really built for the future and it totally meets today’s needs,” Thurber said of the new detention facility.

The general contractor for LCDAF was Sampson Construction of Lincoln.

“The judges had to bite their lip when we couldn’t bring inmates in on time,” Thurber said.

Thurber estimates cost savings to the county on the transportation of inmates to be approximately $1.4 million annually.

With ample space and a variety of housing configurations, the facility will now be able to provide the appropriate environment for a wider range of classifications of inmates.

“The issue is that, since this is a jail facility, sentencing anywhere from a day to one and possibly two years,” Newport said.

The direct-supervision jail provides larger areas for bookkeeping and mental health wing, which the previously building was unable to accommodate.

“It did not have a way to adequately observe suicidal or mentally ill inmates,” Thurber said.

Construction was not without its difficulties. Delays occurred when the $17 million geothermal wells, partially funded by a $5 million grant from the U.S. Department of Energy, were drilled with an improperly sized drill bit causing wells to become too narrow.

“It was probably the most complicated building in this jurisdiction” said Thurber.

Approximately 145 of the 667 305-foot-deep wells were redrilled after Leuck’s Drilling Co., subcontractor for the geothermal well project, notified the Nebraska Department of Health and Human Services of the mistake.

But with the redrilling, the geothermal ground-source loop field will be the largest system of any county correctional facility in the United States, Thurber said.

Along with the geothermal wells, which provide heating, cooling and backup power to the detention facility, the design made movements toward energy efficiency with daylighting, energy-efficient HVAC equipment and lighting controls.

Tours of the LCADF will take place April 4-19. Thurber said the tours are a way for taxpayers to get a firsthand glance at what city funds are going toward.

“We had people that had some concerns about the amount of money we were spending,” Thurber said. “We’re going to show them why we did the things we did in this design.”