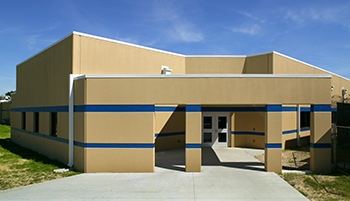 Because the construction team was able to return substantial savings to the project owner, this allowed them to negotiate phase two of the project and renovate the sheriff’s office. This included more than 18,000 square feet of finished interior space with 1,500 square feet of detective’s workspace, evidence storage, an enclosed sallyport and an exercise room. The renovation also included a training room, armory and interview room with an adjacent meeting room.

Correctional News spoke with Bryan Ferris, senior project manager for Rives E. Worrell Co., about the project and what it means for Effingham County.

Q: What was the main goal of this project?

Ferris: The main goal was to provide the maximum bed count for the lowest possible price. Effingham County was at maximum capacity in their current facility and had dedicated using SPLOST [a special-purpose local-option sales tax] funding to drastically increase the amount of beds they had. Included in that goal was selecting the best possible site to make that maximum bed count possible.

Q: What are some of the key design elements?

Q: What were some of the biggest challenges on the project, and how did your team overcome those challenges?

Ferris: The single largest challenge for the project was the budget. Early on, the design-build team understood the constraints and was involved in a site-adapt investigation that eventually led us back to using the occupied campus. We provided a plan to reuse the existing jail and tie into the existing prison in order to share laundry and food services, which would accommodate the increase in beds for the county jail. There was great risk involved in tackling the entire project for the stated budget, so the design-build team creatively agreed to construct Phase I of the project prior to committing to Phase II.

Phase I included the new jail facility necessary to increase the number of beds for Effingham County and the secure corridor between the new jail and existing prison. JE Dunn carried a modest contingency during Phase I, which was not used at all, and we were able to return the entire contingency along with additional project savings to Effingham County to make Phase II possible. Phase II included the demolition of the previous jail, along with the complete renovation of the existing sheriff’s office with a connecting corridor to the new jail.

Q: How did this project differ from ones you’ve completed in the past?

Ferris: This project was unique. While we have completed stand-alone facilities across the entire country, this project offered a separate set of challenges as we were tying it into two operating facilities. This project utilized lean management principles and the Last Planner System, which were not currently being utilized in the Savannah market.