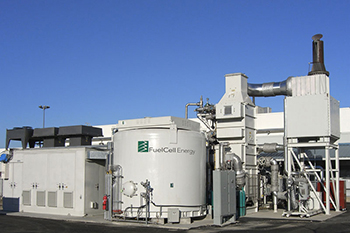 The Santa Rita Jail, located in Alameda County, is the third largest county detention facility in California and fifth largest in the nation. The jail’s population hovers around 4,000 inmates, and it typically consumes more energy than any other county government building. This latest sustainability project aims to reduce the jail’s peak electricity demand and while also improving both the security and reliability of its power supply.

The new fuel cell plant will replace a smaller existing power plant installed by FuelCell in 2006. The new iteration will meet approximately 60 percent of the jail’s total base load power demand as well as 70 percent of its energy use. All excess heat from the fuel cells will be used for heating water. Generating both power and heat from the same unit of fuel will reduce emissions and fuel usage from combustion-based boilers, decreasing the Alameda County’s carbon footprint while simultaneously enhancing the jail’s sustainability profile, according to a statement by FuelCell. Additionally, the new fuel cell power plant will operate in parallel with the jail’s existing solar array and battery storage system.

“Installing the fuel cell continues the Alameda County Board of Supervisors’ long standing commitment to environmental leadership through the adoption of clean, on-site power generation that delivers cost savings,” said Acting Director of the General Services Agency for the County of Alameda Caroline Judy in a statement.

The ultra-clean fuel cell power generation process avoids combustion and associated pollutants such as nitrogen oxide that causes the smog and sulfur dioxide that contributes to acid rain and particulate matter that can aggravate asthma. The fuel cell power plant at Santa Rita Jail will avoid the emission of approximately 5,800 tons of carbon monoxide annually when compared to average United States grid, equivalent to the carbon absorbed by approximately 4,300 acres of U.S. forest in one year, according to a statement by FuelCell. Fuel cells also electrochemically convert methane from natural gas or renewable biogas into electricity and heat in a highly efficient process that emits virtually no pollutants due to the absence of combustion.

Operating under a PPA will allow the county to complete the project with no upfront capital investment. Payments will be made on a per kilowatt hour basis only for power produced at a price lower than the electric grid.

“This critical infrastructure installation is an excellent application for our ultra-clean and affordable power generation solutions, and illustrates how fuel cell plants complement intermittent power generation such as solar,” said Chip Bottone, president and chief executive officer at FuelCell Energy. “The Alameda County Sheriff’s Department needs reliable, cost-effective and clean energy and hot water to do their important work day in and day out, and we are proud to supply a critical part of their infrastructure.”