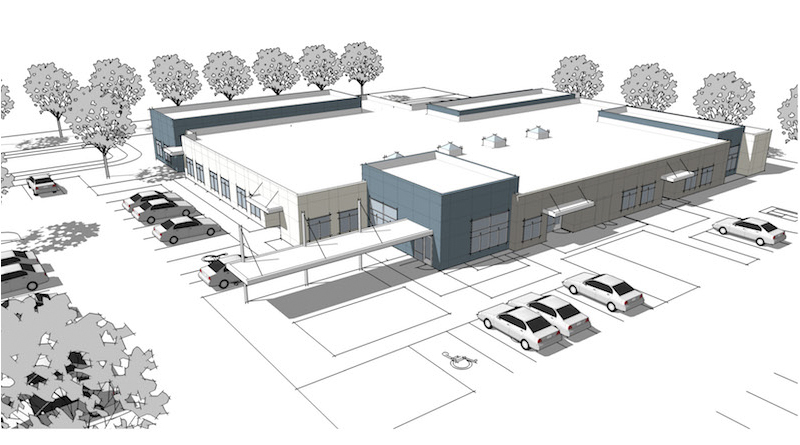 CENTRALIA, Wash. — Cascade Mental Health Care broke ground on a new facility in Centralia in early May. It is the latest of several evaluation and treatment centers being built in Washington as the state puts more of an emphasis on community psychiatric beds in lieu of state ones.

“We’ve found that it is less traumatizing for people to go to a facility in their own county rather than be transferred [away],” said Dr. Richard Stride, CEO for Cascade Mental Health Care. “Studies have proven that if you can get people in a facility that is local where their families can come visit and be part of the sessions as well as provide natural support, then recovery is much quicker.”

The $8 million, 22-bed facility will include 16 locked units for court-mandated treatment for patients with more serious issues, while the remaining six beds will be in unlocked units for patients who voluntarily check themselves into treatment. Seattle-based Ron Wright & Associates is serving as the architect on the project.

Dr. Stride said that patients will mainly consist of individuals who are admitted under the state’s Involuntary Treatment ACT (ITA), which allows individuals to be committed by a court order for a limited period of time. These individuals are typically experiencing some sort of situation where they are not making decisions for themselves, according to Dr. Stride.

Patients will typically stay an average of about 14 days, with the initial detention only being for 72 hours, according to Dr. Stride. After that time, the detainee will go to court, where a designated mental health professional (DMHP) will be required to justify the reasons that this person needed to be detained. Then, once they return to the facility, psychiatric professionals will help determine how long that person stays in treatment.

The main goal of the facility will be to provide local treatment for more serious mental health issues as well as work as an evaluation center so that patients can avoid being sent to other places such as Western State Hospital in Lakewood. While Lewis County Jail does currently provide care with an initial evaluation that occurs right after booking, the wait for actual care can be up to three months, reported The Chronicle, a local news source.

In addition to beds, the residential-treatment facility will feature a dining area, laundry operations and programming spaces typical of most inpatient facilities that provide psychiatric services and group therapy. “We try to help [patients] get back on their feet and avoid being in jail,” said Dr. Stride. “Our philosophy is mentally ill patients don’t need to be incarcerated; they need to be helped.”

Over the past couple years, state Legislature has increased funding for these types of local facilities, including $3 million for this facility in Centralia. It will be similar to the Thurston-Mason Behavioral Health Center, located in Olympia, according to The Chronicle. It’s the state’s goal to divert more people with mental health issues from jail. The state is even requiring that every sheriff’s deputy and corrections officer receive at least 40 hours of crisis intervention training to learn how to deal with situations that involve some sort of mental health issue.

“This space is based on a need in the state of Washington for psychiatric beds,” Dr. Stride said. “A lot of these evaluation centers are being built around the state and sponsored by the state and the local mental health centers that run them.”

The facility is currently on track to open in early spring of next year.