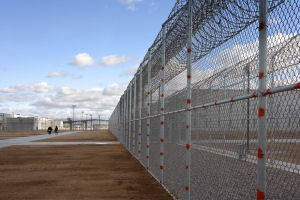 In January, Corrections Corporation of America completed the final phase of construction of the 3,240-bed medium-security La Palma Correctional Center in Eloy, Ariz., the largest planned facility in the 25-year history of the Tennessee-based private prison operator.

The $166 million prison began its evolution from concept to concrete as nothing more than a sketch on a crumpled napkin handed to general contractor JE Dunn — three months after seeing that preliminary drawing, the contractor broke ground on the project.

“The most satisfying aspect of the project from my perspective, was being able to pull it off,” says Joseph F. Haines, AIA, senior principal at DLR. “We felt it was a tremendous challenge because no one had ever built a facility that large and that fast within those kinds of secure parameters.”

CCA implemented a phased-opening plan to accommodate California state prison inmates arriving at a rate of 100 per week as JE Dunn, headquartered in Kansas City, Mo., teamed up with Omaha-based architectural firm DLR Group to complete the fast-track project in only 15 months.

“The combination of the fast track and phasing make this project the most challenging I’ve been involved with in my 25 years of construction and industrial development experience,” says Buddy Johns, senior director of project development with CCA.

“Owner, architect and contractor also implemented several project-delivery strategies, such as 3-D modeling and multiple packages of three-phased schematic plans facilitating multi-phased construction, which yielded significant time and schedule efficiencies that ensured housing capacity came on line as required by the contract with the California Department of Corrections and Rehabilitation.

“It was an extreme schedule and I knew we were taking on a significant risk,” Johns says. “As the owner, we just tried to be positive and focused from day one, and have confidence that we could do it. But taking on something that’s never been done before, you have to have some reservations or you’re not human.”

“CCA’s prototypical housing design was a crucial factor in the project team’s ability to design and construction the 3,240-bed facility two months ahead of schedule.

“That prototype allowed us to shave time off the design process because you’re able to easily shape it into a specific design response for that particular project in the shortest amount of time,” Haines says.

The prototype, which was developed by the company’s internal design group in conjunction with DLR more than 10 years ago, has gone through many iterations as CCA looked to improve on construction, maintenance and operational aspects such as staff-to-inmate ratios.

“Even though you’re working with a prototype, you’re always looking to tweak that and improve upon it with every project,” Haines says.

The use of precast concrete cells manufactured by Oldcastle and Rotondo Weirich, who delivered a combined 864 modules to the site, also supported the accelerated project timeline. The cell manufacturers’ recent experience on CCA projects shaved valuable time off shop drawing and related processes to further speed the process.

“JE Dunn has worked on more than 20 CCA projects, so we understood the client’s needs, we knew what we would get from DLR and what was expected from us, and while we knew going in that the key subcontractors had the horsepower to meet the schedule, the collaboration and coordination proved critical,” says Ben Strobl, senior project manager with JE Dunn.

“The project team, which featured companies scattered across several states, overcame the geographical barriers to communication through a web-based project management and information-sharing tool developed by Marathon Reprographics.

The Smart Plans program allowed team members to manage the submittal and turnaround of project documents and drawings, view plans, specifications and addenda, collaborate on project specifics and monitor job status via webcam. The sharing of information electronically generated significant time savings, reducing request for information response times from days to hours and drawings approval times from weeks to days.

“If you were building a project like this in the public sector, you could be talking about a 30-month to 36-month schedule, and the expediency of decision making from the owner really helped to keep the project on track,” Strobl says.

Typically, CCA builds a central structure to accommodate the service and operational support for inmate housing. However, the 110-acre La Palma includes three separate and semi-independent secure 1,080-bed compounds with 24 housing and support buildings with more than 599,000 square feet of space.

The three-compound campus is situated within a secure perimeter with approximately 450,000 square feet of total building space devoted to inmate housing — six 360-bed general population and three 360-bed segregation units. A security patrol road runs alongside perimeter fencing, which is augmented with an intrusion detection system and site lighting.

Inmate housing in each compound is serviced by satellite support buildings that house inmate education and vocational program space, administrative offices, a medical clinic, food service/dining area and a library.

Mechanical and electrical systems are decentralized, in line with CCA’s default configuration, which is designed to yield lower installation cost, ease of maintenance and operational flexibility.

Although the project team implemented a number of measures to reduce energy consumption and mitigate the environmental impact of the facility, efficiency efforts centered on water conservation and management strategies.

Water production and treatment is the only shared or central utility on the entire site with several water wells tied together into a water-supply loop.

“Water is a precious resource, particularly in the case of dessert locations, and water is typically one of the high-consumption areas of prison facilities,” Haines says. “Although the focus of water preservation was operational costs, that dovetailed into a sustainable building strategy.”

La Palma, like the two adjacent facilities, has a dedicated wastewater treatment plant and the most significant component of the drive for water efficiency is a gray water system, which recycles water for re-use in housing units. Shower water is processed through a chlorinating and filtering system and re-used to flush toilets throughout the housing units.

“We worked extremely hard on the engineering side in terms of wastewater issues on the site and to minimize the water usage through the use of high-efficiency equipment and systems, including low-flush toilets, low-flow showerheads, and recycled and gray water systems,” Haines says.

CCA also retrofitted its other two facilities on the site, Red Rock and Saguaro, with low-flow showerheads to augment the facilities’ existing low-flush toilets.

“Water efficiency measures and gray water re-use systems incorporated at all three facilities, which have a combined capacity of more than 6,500 beds, are projected to save about 130,000 gallons of water per inmate per day — nearly 48 million gallons per year in water savings.

Although the team considered including solar arrays, the project’s tight schedule ruled out any possibility of incorporating renewable energy measures.

“The marching orders for La Palma were not LEED certification, they were to get the beds on line by the contracted date, so we didn’t have secondary goals or guidelines to explore different options,” Haines says.

However, CCA is moving toward improving the efficiency and sustainability of facility operations by updating its prototypical design to incorporate energy and water efficiency measures, more natural daylighting and the generation of renewable energy.

““We’re looking at number of areas, such as solar power, efficient lighting, daylighting, water re-use and conservation, which would move our prototypical design in that direction,” Johns says.

A 2,200-bed facility currently under development in San Diego is designed to be CCA’s first LEED-certified facility, and moving forward, every new CCA facility will be designed to meet LEED standards. n

In October 2007, CCA broke ground on the new Eloy facility to expand housing capacity to accommodate additional inmate transfers from the California Department of Corrections and Rehabilitation. In May, California Gov. Arnold Schwarzenegger authorized the temporary out-of-state transfer of up to 8,000 state inmates after declaring a state of emergency for the prison system, which housed 170,000 inmates at 33 facilities with a combined design capacity of 80,000 beds.

The move was part of a plan to reduce severe overcrowding in the prison system after federal courts ruled that conditions were unconstitutional and improvements.

The use of 864 precast concrete cell modules by Oldcastle and Rotondo Weirich supported the accelerated project timeline, which delivered the facility in 15 months.
La Palma’s gray water system will conserve an estimated 20 gallons of water per inmate per day, which equates to nearly 23 million gallons in annual water savings.
The 3,240-bed La Palma Correctional Center is the largest planned facility in CCA’s 25-year history.