The Denver office of international architectural and engineering firm Heery International provided design services for the 103,000-square-foot expansion of the courthouse, which was constructed in 1998. The project included the addition of a new courthouse wing and public lobby to the existing 200,000-square-foot justice center, which serves Colorado’s 17th Judicial District and Adams and Broomfield counties. 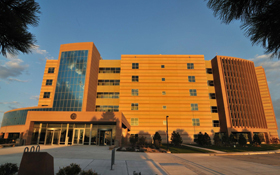 Constructed of steel, precast concrete and glass, the new wing is designed to match the existing courthouse facade and continues the colors, lines and shapes of the original building. Designers also incorporated a range of strategies and measures to respond to site and climate conditions. Exterior solar fins and high-performance glass are designed to shade interior spaces while reducing HVAC loads and overall energy usage.

“When designing the courthouse expansion, we incorporated lessons learned from courts and county staff that operated the justice center over the past decade,” says Ted Halsey, Heery executive associate and design principal on the project.

The envelope of the new wing angles away from the existing building to preserve exterior views from interior public areas; the orientation also allows for future campus development. The design team relocated an in-custody transport driveway and bus garage to accommodate future master-planned areas on the south side of the justice center campus.

The expansion of the courthouse facility is designed to address the county’s immediate courtroom capacity needs and meet projected caseload growth for the next 10 to 20 years.

Unprecedented population growth in the district overwhelmed the courthouse as the rapidly increasing caseload exceeded the capacity of the 21-courtroom facility. By 2007, seven judges were sharing space in the courthouse, and three additional judges are scheduled to join the 17th District bench by 2011.

The next phase of the master-planned project calls for the addition of a new wing on the east side of the justice center.

The newly completed expansion project, which was funded through a voter-approved, 20-year extension of the county’s 1993 one-half cent sales tax in 2006, also delivered shelled space for 10 courtrooms on the second and third floors of the addition, hearing rooms and alternative dispute resolution conference rooms.