Following a change in city leadership after planning was completed, the green building designation required a major re-orientation of project 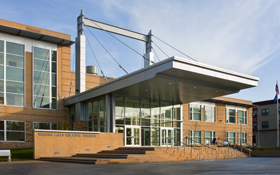 objectives after construction of the facility was already under way. The project team, which includes HOK architects and construction management firm LP Ciminelli, started construction of the almost 135,000-square-foot Niagara Falls Municipal Complex in January 2008 when incoming Mayor Paul Dyster consulted with developers about the possibility of pursuing LEED certification.

“We had the dynamics of changing administrations — with a new mayor and new council members — and had to live with some of the decisions of the previous administration,” says Salvatore LaGambina, vice president of Ciminelli Development Company Inc. “But we went back to the new administration and showed them how to put the LEED submission together and achieve certification at no cost to the city through a New York state grant.”

During the planning phase in 2006-07, then Mayor Vincenzo Anello ruled certification out of the project’s original scope of objectives as city leaders focused on safety, security, community impact and cost.

“The previous administration instructed us not to pursue LEED certification — nobody in the Buffalo area was doing it and there was a perception that it cost a lot of money,” LaGambina says. “Remember, this was a $47 million project that we got certified for about $30,000, which in the scope of things is nothing.”

The project was Initially structured as a lease buy back, but more changed to straight public ownership after the city moved to raise the funds through a bond sale. Ciminelli partnered with Largo Real Estate Advisors and Bellevue LDC — a project development vehicle set up by the city — to develop, design, construct and deliver the justice complex, which sits on a 5.5-acre parcel on Main Street in downtown Niagara Falls.

“One of the main reasons this project ended up on Main Street is that a lot of businesses had shut up shop,” LaGambina says. “There was a big revitalization component to this project and some private money is starting to flow back into the downtown area.”

The new complex, which houses the municipal courts and police headquarters in adjacent buildings connected by a common public entryway and lobby, replaces the existing 53,000-square-foot 1960s justice building that was cramped, outmoded, and troubled by MEP and structural problems. 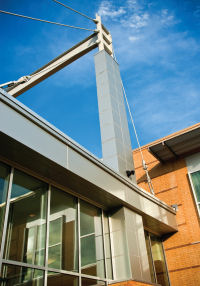 The courts side of the complex occupies two-thirds of total square footage. The three-story facility incorporates four courtrooms, judges chambers, jury assembly and deliberation rooms, dedicated mediation facilities, the clerk’s office, and offices of the prosecutor.

“On a lot of courthouse projects you find scope and budget creep, but here we had a situation where the project had to work for a certain number and the solution had to fit,” says Duncan Broyd, RIBA, LEED AP, senior vice president and management principal at HOK.

The new complex is defined by the striking symbolism and scale of a bridge-like architectural component inspired by the majestic expanses of the suspension bridge that connects the United States and Canada within an earshot of the great falls.

The powerful bridge element, which recalls the imposing structural pillars and tension cables, juts out from the building façade to create a portico over the main entrance that provides a degree of protection from the elements. A large portion extends inside over the enclosed entry vestibule and opens out into the lobby, which accommodates all the security screening elements.

On the court side, the design team situated courtrooms and galleries to the fore of the building, integrating multi-story spandrel elements and expansive fenestration that allows abundant natural light to penetrate interior spaces and opens up the interior workings of the building to those outside.

“It treats the user well, from the time you walk in you’ve got great daylighting and a sense of dignity,” Rodman says. “It’s a comfortable space with well-designed courtrooms and public areas.”

The new complex is designed with three separate secure and non-secure circulation routes for building users, in stark contrast to the existing facility, where staff, inmates and visitors walked the same hallways.

“We worked hard to ensure that we got every square foot of the building usable, because at the end of the day that’s what costs money,” Broyd says. “This is a relatively low cost per-square-foot building that meeting a lot of needs.”

A two-story building component across the public lobby from the larger judicial space houses the police portion of the facility and multi-agency emergency operations center. The first floor houses the police crime scene unit and forensic laboratory space, marking the first time the department’s forensic activities are conducted in one dedicated space.

“They have a proper CSU laboratory now that is a huge upgrade from working out of a converted janitor’s closet, as was the case in the [previous] building,” Broyd says.
The basement level of the complex is also occupied by the police department, including inmate intake and housing areas, and a holding area with 53 detention cells. The prefabricated steel cells were manufactured by Sweeper and outfitted with an MEP chase for safe maintenance access.

“That clearly saved us some space, because we were dealing with 2-inch steel walls instead of 8-inch masonry walls, which netted us better circulation areas,” Broyd says.

Doubling as the central holding area, six additional cells, also located in the basement, are shared with courts.

“While we had to blend court holding cells, which operate under one set of regulations, and jail cells, which operate under another set, there wasn’t any redundancy associated with building two sets of cells,” Broyd says. “There are more cells than you would typical do for a courthouse project, it also enabled us to get a separation of different types of inmate — men, women, juveniles, special needs — which ultimately is safer.”

The basement level, which ho 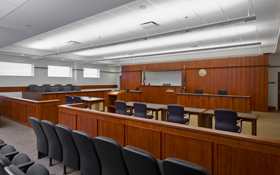 “The project is particularly satisfying from my perspective because you’ve got three different users in this building that are excited that many of the things they talked about are happening in terms of how the building works because they were serving the community out of atrocious conditions that made everything hard work,” Broyd says.

Green technology has evolved considerably in recent years, in tandem with the mainstreaming of sustainable design strategies and construction practices, to the point where energy- and water-efficient equipment and systems have become standard components for the institutional construction sector.

“When LEED was new to the market, there was a little bit of a premium involved in green products, but manufacturers have really jumped on this and it doesn’t cost them any more to deliver these products,” LaGambina says. “I don’t think you can even buy an air-handling unit that’s not Energy Star-compliant.”

HOK’s incorporation of a range of sustainable elements and measures as part of its standard approach to facility design meant the project team avoided any major retrofits or changes on the construction side to achieve certification.

“We’re finding that energy savings of 30 percent are coming at no cost, but, if you’re going for LEED Silver, Gold or Platinum certification, certainly there are some extreme measures you’ll have to take and those costs, depending on the facility, can be significant,” LaGambina says.

The project’s reuse of an urban site with public transport links proved invaluable in the quest for LEED. Equally beneficial, the construction team documented everything from the outset of the project, as standard practice, even before the decision to pursue the green building award.

“We had a design that was conducive to LEED certification, we had the submittal trail already in place to document requirements such as low-VOC, daylighting and water and energy efficiency, and we had an urban redevelopment site,” LaGambina says.“It’s always easier to march down these paths if you know what your objective is when you start the project,” he says. “Under other circumstances, it can become very difficult if you make these decisions down the road and the paper trail can be crucial.”