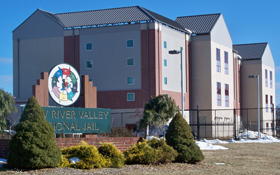 “Our original facility was designed for a capacity of 371 inmates and it was determined that it would take at least 15 years to reach that number,” says Gerald McPeak, New River Valley Regional Jail Authority superintendent. “The facility reached its original design capacity barely three years into operation.” The jail houses male and female inmates.


Prior to the addition, the daily inmate population topped 700, and as many as 755 on weekends, often requiring double-bunking in nearly every housing unit. Inmates slept on the floor in day rooms or in individual cells. On weekends, inmates serving non-consecutive day sentences were housed in the indoor gymnasium.

“Obviously, overcrowding is a major problem for our facility,” McPeak says. “Both the building and staff have been stretched to the limit. The wear and tear on the structure is evident even to the general public. Resources are pushed to the breaking point on a regular basis. Costs increase exponentially. Annual operating budgets increase as a result and everyone from the inmates to the general public suffers.”

The NRVRJA, which owns and operates the jail, decided in 2005 that an expansion was required. The project eventually cost the authority less than anticipated: approximately half of the $55 million price tag came from the Virginia State Compensation Board. The other half was covered by the localities served by the jail, which also pay $27.81 per inmate per day. The seven localities served include Bland, Carroll, Floyd, Giles, Grayson, Pulaski and Wythe counties, and the city of Radford. 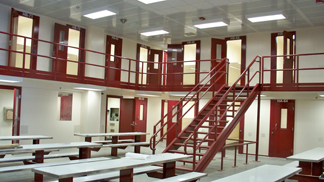 The limited footprint provided a significant challenge to Thompson & Litton, the project architect.

“It set the tone for the project’s design,” says Mark Swecker, T&L senior project manager. “The obstacle was a building pad that was originally planned for a 50 percent single-level expansion.”

Construction costs were also a critical challenge for the design team as the industry was experiencing rapid cost increases during the design phase, which began in early 2006.

“It was this increase in costs that inspired me to think outside the cell,”  Swecker says. “It was this thinking that guided the team through various obstacles faced in the design of the new expansion. It became readily apparent that any planned expansion could not be contained on the current building pad without expanding it.”

However, expanding the building pad had its own constraints due to the storm water retention pond and perimeter site utilities being directly adjacent. Through careful design and planning, a minimal pad expansion was achieved to allow for construction of the new five-level tower.

The tower’s design is organized around a central double-loaded corridor with each of the various levels accessed by four elevators. Two elevators serve the staff, while two large capacity elevators are utilized for inmate movement.

While the majority of the work focused on the new addition, it was necessary to reconfigure the existing jail.

The major difference between the existing facility and the addition is the supervision of inmates. The existing jail was designed for indirect/remote surveillance of inmate housing areas. The new facility utilizes direct supervision.

Each officer will have a control desk in the dayroom from which to observe and monitor activities, and a touch screen to control cell doors. The officer will further provide access to the various program spaces located adjacent to each dayroom. 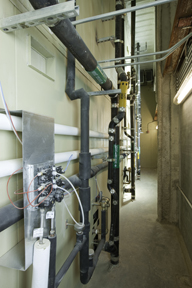 Each housing unit includes a multipurpose room, recreation space and video visitation facilities. Through the use of direct supervision, the need to move inmates within the facility is minimized.

“We are expecting to see vast improvements in supervision utilizing direct supervision,” McPeak says. “We believe that we will be better able to control the inmates, reduce damage to the jail’s physical plant and establish a better rapport with the inmate population.”

Indirect supervision at times is problematic, McPeak says. Staff has a more difficult time gauging the atmosphere among the inmate population and it can be tougher to identify problem inmates and determine when damage occurs and who may be responsible.

“With indirect supervision, staff will be able to utilize all of their senses 24 hours a day to control and manage the population,” McPeak says. “Ultimately we believe the stress on both staff and inmates will be greatly reduced.”

The integration of the addition and the existing structure went exceptionally well, according to planners. The shell of the building was completed first and the majority of mechanical, electrical and plumbing were installed after the wall panels were completed.

“Once the wall panels were started, all the crews fell in behind the panel sub, starting on the first floor and progressing up each floor until completion,” Caudill says.

Additionally, the HVAC system was designed to be virtually ductless, allowing for the elimination of most ductwork above the ceiling.

With a nearly 24-month schedule, Balfour Beatty Project Manager Mick Caudill says the biggest challenge was the complete renovation of the existing kitchen.

“Meal preparation for the inmates could not be interrupted under any circumstance,” Caudill says. “A temporary kitchen, which consisted of six semi-trailers of cooking equipment, freezer, and cooler space was set-up and then connected to the existing jail with fully enclosed walk-through trailer units.”

After a number of different options were considered, the decision was made to pursue a modular kitchen unit.

“The location on-site for this kitchen was critical, as it needed to be in close proximity of the existing warehouse, walk-in freezers/coolers and the loading dock,” Swecker says.

Lisa Kopochinski is a freelance writer based in Sacramento, Calif. She can be reached at lisakop@sbcglobal.net.