Achieving the standards for LEED Silver certification set by the United States Green Building Council would be a difficult enough task on any traditional prison or jail project. But when it comes to a military detention facility, the obstacles could seem insurmountable due to especially challenging technical and security aspects.
With an expert team in place staffed by architectural and construction professionals certified in LEED (Leadership in Energy and Environmental Design) the task can become far easier. Such was the case recently with the opening of a new medium-security military detention facility at Fort Leavenworth, Kan., where due to planned military base closures around the country, the military needed additional space to house offenders from within its ranks.
The opening of the new regional facility at the existing U.S. Disciplinary Barracks now make up the Fort Leavenworth Military Correctional Complex. The recently completed regional facility has the capability to house more than 500 inmates made up of members of all branches of the military serving sentences of five years or less. Inmates began arriving at the new facility in October.
Construction on the $92 million prison began in April 2008 and was completed in June of this year. It replaces smaller regional prisons at Lackland Air Force Base in Texas, Fort Knox in Tennessee, and Fort Sill in Oklahoma. The consolidation was done as part of the government’s Defense Base Realignment and Closure program, established by congress in 1988 and put into gear in 2005.
Mike Chirpich, project engineer with the U.S. Army Corps of Engineers, says that the facility was built to maximize the use of sustainable design and development practices set by the USGBC. He added that the U.S. Army does not require any formal certification from the USGBC, so the Army Corps of Engineers were required only to keep diligent records, and essentially self-certified the project. 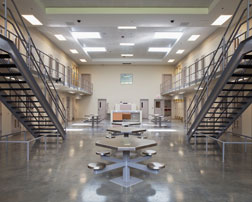 “The Department of the Army requires projects to meet LEED silver,” Chirpich says. “The designers had to work with the end-user to ensure the functionality and security requirements of the prison were met while still trying to achieve a LEED silver rating.”
Those standards, he said, focus on six key areas: sustainability; water efficiency; energy and atmosphere; materials and resources; indoor environmental quality; innovation and design process.
Going for Silver
JE Dunn Construction Co., the contractor on the project, recommended the use of modular cells in place of traditional block or precast panel construction, which marks the first time the technology has been adopted by the Army Corps of Engineers. The RCF consists of 512 beds, with 48 beds being located in the special housing unit area and 464 beds being located in the general housing and dormitory area.
“The SHU is for special-needs inmates and there is one bunk for each cell,” says senior project manager, Brian Dunn. “The GHU has two bunks in each cell and there are 124 double-cell, precast modules being provided and one open dorm area for inmate housing.”
Joining JE Dunn on the project was AECOM affiliate Hayes, Seay Mattern & Mattern.
In achieving the qualifications for LEED silver, Dunn says the entire team found resourceful ways to meet the requirements, including the use of a geothermal well system, skylights in dayrooms, large amounts of exterior glazing, alternative transportation means, efficient landscaping, material selections, optimizing energy performance, and recycling efforts.
JE Dunn project engineer Donny Tennyson says that since prisons have large inmate populations, there are many LEED credits that are immediately more difficult to achieve. For instance, such items as bike racks, changing rooms, and parking spaces are quantified based on a percentage of the occupancy of the building.
“This means we had an increase in materials and overall costs to satisfy these requirements,” Tennyson says. “With this project, the credits desired by the federal government were addressed in the design phase, which made it more of a design concern than a construction issue.”
While the team did not have to work around an inmate population — no inmates were there during the construction phase — work was done with inmates in mind. A sticking point was the large amount of pick-resistant caulking throughout the facility.
“Many miscellaneous joints throughout the building had to be addressed with this material to prevent future inmates from having access to hide small objects such as razor blades,” says Tennyson. “By selecting a product with a low VOC, which met the LEED requirements of IQ 4.1, we were able to ensure the indoor air quality was maintained despite the large amounts of sealants being applied to the building interior.”
The project also includes all new infrastructure including primary power, roads and parking lots, and a lift station with general site utilities.
The RCF project includes a 204,835-square-foot main detention facility, a 12,595-square-foot administration building, a 9,903-square-foot warehouse, a 1,082-square-foot pump house — and a 248-square-foot guardhouse.
Support services include visitation, kitchen, dining, laundry, medical, administration, library, religious, vocational educational, legal, interior gymnasium, and central control. Recreation features include a softball field, two full-sized basketball courts, handball court and paved running track. The dining area can seat up to 210 inmates, and there is a vocational area that comprises a textile and upholstery shop, gym, chapel, library, mailroom, pharmacy, social services, investigation, legal and other associated areas.
“The facility has a fully staffed medical and dental area with dental and standard x-ray machines, a full service dental lab, a rehabilitation clinic, audio booth, an optometrist room, and numerous patient rooms” added Chirpich. 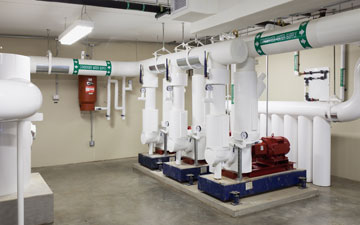 Geothermal Well Field
A unique Green feature to the RCF project is the geothermal well field system that takes advantage of belowground temperatures to heat and cool the facility and pays for itself over time. The system is made up of 480 holes in six subfields drilled 280 feet deep.
“It works by using the constant temperature of the ground, in conjunction with water-based heat pump technology to move heat from the building into the ground during the cooling seasons and to move heat from the ground into the building during the heating seasons,” says Dunn.
Ninety-five geothermal heat pumps provide the heating, cooling, and refrigeration for the facility. Unlike traditional boilers used for heating, a geothermal system requires no natural gas to operate, Dunn says. And unlike traditional chillers and cooling towers, geothermal systems do not require large, noisy, and power-hungry outdoor fans that are disruptive or release chemicals into the environment.
Other environmental practices implemented into the project include:
• 75-percent recycling of construction waste
• Water-efficient landscaping using no potable water and reducing water demand for irrigation by at least 50 percent
• 30-percent water-use reduction
• Five-percent recycled content of project materials
• 20-percent local/regional materials
• 20-percent FSC-certified lumber
• Construction IAQ implementation (during construction and at completion)
• Low VOC materials for all three categories (paints, carpet and composites/agrifiber)
• Indoor pollutant source control
• Low VOC furniture and green housekeeping.
Top Notch Security
Not to be outdone, the security electronics system at Leavenworth is complex and encompasses 340,000 feet of cable. It is made up of an extensive perimeter security system and a state-of-the-art interior system. Buford Goff and Associates, based in Columbia, S.C., was the security electronics designer of record.
Security measures include exterior dual-security perimeter fences equipped with motion-detection, interfaced lighting and razor ribbon wire. A guardhouse located next to the main vehicle sally port controls the main entrance. Officers are stationed at multiple control rooms throughout the facility. The interior CCTV includes over 200 IP networked cameras. This is interfaced with the security PLC and access control system. The facility also includes a “man down” system that tracks the location of the correctional officer’s location throughout the facility. Additionally, the entire exterior of the facility was built to withstand the force of an explosive blast.
With such a large amount of concrete used in the project, it was fortunate from a LEED standpoint that the manufacturing plants were located within 500 miles of the prison.
“This made a significant contribution to our total percentages associated with [LEED] credits,” says Tennyson. “ If these plants were located outside of the 500-mile window, I seriously doubt we could have achieved our LEED percentage goals.” n
Product Data
Perimeter Security/PIDS: Senstar Corp.
Video Surveillance: DVTel
Intercom/Communications Systems: TSK
Access Control System: OMRON
Precast Concrete Cells: Oldcastle
Security Glazing: Global Security Glazing
Security Cell Doors/Locks: Southern Steel
Detention Accessories: Majestic Solutions
Building Management System: Schneider Electric
Mechanical Systems: Geothermal Pumps-Bell & Gossett
Electrical Systems: Schneider Electric
Plumbing System: Zurn
Fire Suppression/Smoke Detection Systems: SimplexGrinnell
Roofing/Insulation: Johns Manville
Food Service Equipment: Cold Zone
Correctional Furniture: Majestic Solutions