Articles
May 16, 2011May 16, 2011 1906 Views Cornerstone Detention Products Inc., Food service, SC, Western U.S.
In one recent pre-dawn morning, John Nurse, the director general of the Barbados Prison Service, and I were walking between our

hotel and the central railway station in The Hague. We had just finished two days of strategic planning for the International Corrections and Prisons Association. As we made our way through a new urban center development of high-rise, mixed-use development, I asked him if he thought a jail could be a part of this bold expression of economic confidence.
This was not a completely facetious question as Holland, the 28th most-dense country, already has a high-rise jail. Many dense urban centers — such as Boston, Miami, San Diego and Seattle — have similar solutions, but the location was driven by a desire to be close to the courts, not as a solution to urban living. If asked, most jail administrators admit that their preference is horizontal and not vertical. Perceived ease of management is the frequent answer.
In the last issue of this magazine, Joe Lee argued that the future design and operation of correctional facilities will require a great deal more attention to the total cost of ownership. Perhaps it was the particularly brisk morning air in The Hague, but as I made my way through this new urban reality, I thought there is no compelling reason why detention facilities should be excluded from high-density, mixed-use developments.
Being annoyingly repetitive, in 2005 and 2006, I wrote articles for Correctional News suggesting that higher-density solutions for jails, in particular, should not be excluded from consideration simply based on management concerns. Most of those can be resolved, as Arlington County, Va., has done for more than a decade. If the total cost of ownership is truly vetted, high-rise solutions have many advantages because of the reduced carbon footprint and the less stressful impact on social infrastructure.
Our attitude regarding the location of jails seems to give preference to the sites reflecting the least resistance. However, the total cost of ownership not only involves the jail budget, but the cost to the community for staff availability, access to community resources, and convenience of public transportation. Facilities for public safety and justice are integral components of the social costs and the provision of these buildings and services should be accepted as part of a safe society.
Recognizing that for reasons associated with the economy and decelerating rates of incarceration, very few detention facilities are being constructed anywhere for the foreseeable future, now may be the best time to gaze toward the city of the future. Seattle has done just that, and while the project is delayed indefinitely, at least a high-density solution was evaluated based on a more comprehensive consideration of costs. 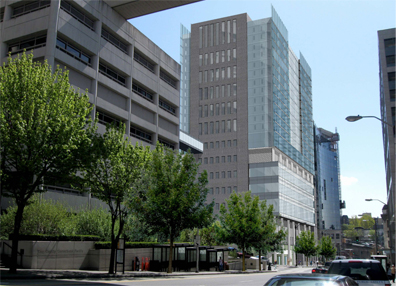 A high-rise jail was evaluated for a Seattle project that is currently on hold.

Most readers will not be surprised that the construction cost of a 640-cell high-rise jail on a half-acre site in the middle of downtown (no neighborhood objections) was higher than that of a suburban location (that no neighborhood wanted). Independent estimates suggested the construction differential was a 7.4 percent greater cost for the high rise. The staffing requirement, again in favor of the low rise, was only a 6.7 percent (10 employees) difference.

These differences should not be dismissed as irrelevant, but if we are serious about the total cost of ownership, the environmental and social costs must be considered. Overwhelmingly, inmates held in King County jails are Seattle residents, and upon release they will return to the city. As a city that has long displayed a social consciousness, Seattle has an extensive base of social services that aid the inmate and their families on re-entry. These staff members typically work in the downtown so the carbon footprint is significantly lower for utility, transportation, and development costs if the clients they support are also local.
Perhaps the most intangible factor, however, is the benefit of good planning. In a recent Atlantic Monthly article, Edward Glaeser presents a passionate case for saving our cities through high-rise buildings that accommodate virtually all urban land uses. Why shouldn’t jails, an essential social service, be included in mix of uses that are required to support urban living?
I know of several cities that once this interminable recession is over must address the replacement of antiquated jails. Rather than push further into the suburbs, abundant brown-field sites could be considered. The concept developed by KMD Architects for Seattle makes sound urban design and economic sense. Within three blocks of the potential new jail site are multi-million dollar condominiums, a new office building, and high-end retail. Yet, no recognizable objection emerged for the urban solution.
For years, the neighborhood surrounding the state prison complex in Baltimore has lived with the image of the prison village even though the facilities are with a short distance to the famous inner-harbor development. In a courageous move by the Department of Public Safety and Correctional Services, the state, with the participation of the city, embarked upon the planning for a major correctional complex in a corridor from the Johns Hopkins medical complex to the center of the City.
Instead of pushing the location out to the fringes of the urban area, the state instead acquired a brown-field site that will become integrated with, rather than shunned by, the community. The team of PSA-Dewberry, Penza Bailey Architects, and AECom has collaborated on the development of options for a side-by-side youth and women’s detention center that is based on solid management and urban planning principles.
Both the Seattle and Baltimore projects are visionary. They acknowledge that corrections is an integral part of society and that the planning and design of these structures should be given the same careful consideration as that of cultural, retail, residential, and commercial uses. Because the jurisdictions responsible for these new detention facilities looked well beyond first dollar investment for justification, they provide valuable benchmarks against which other cities can re-examine the total cost of ownership.
Those who read this magazine understand the great difficulty of locating, planning, designing, and operating detention facilities in urban environments. High-rise solutions have been a part of the mix of available options ever since Elisha Otis introduced the concept of safe vertical travel. However, high-density jails will remain the unwanted neighbor until the imagination of urban planners and architects is unleashed to demonstrate the opportunities to reduce the total cost of ownership.
Stephen A. Carter, AICP, is principal of Carter Goble Lee LLC in Columbia, S.C., and a member of the Correctional News Editorial Advisory Board.