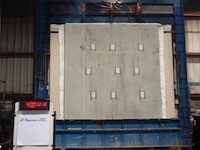 The interior wythe was loaded to 4,000 pounds per foot gravity load and exposed to fire for a duration of four hours, with temperatures reaching 2,000 degrees Fahrenheit. According to the company, the temperature on the exterior wythe of concrete increased by only 130 degrees Fahrenheit, which is only 50 percent of the allowed temperature increase per ASTM E-119. The successful four-hour mark is the first and only ASTM E-119 test on an integrally insulated sandwich wall using an energy-efficient FRP wythe connector.