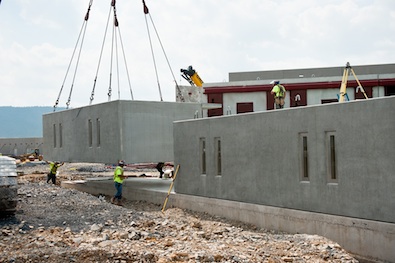 BELLEFONTE, Pa. — At the time of the contract award, the new State Correctional Institution at Benner Township in Bellefonte, Pa., was the largest correctional facility the Commonwealth of Pennsylvania had built in the past 10 years. The 629,573-square-foot, 2,000-bed facility will create nearly 600 jobs in the process.

The $187.3 million project began in June 2010 when contracts were executed by the Pennsylvania Department of General Services, or DGS, and the design–build contractor Chantilly, Va.-based Hensel-Phelps. The project architect is Richmond, Va.-based Moseley Architects of Americas, LLC. PA Correctional Industries — an inmate work program — made all the cell furnishings for SCI Benner Township, and Rotondo Weirich Enterprises, Inc., installed all inmate furnishings in the cell units at its manufacturing plant.

The facility will also feature a transportation hub that will serve an inmate transfer station where inmates are temporarily housed while awaiting transfer to other different facilities within the state prison system.

Many companies are working in unison to complete the project by its slated completion date of January 2013. Brighton, Colo.-based Sierra Detention Systems worked as a subcontractor on the job to install detention equipment and security electronics.

“Sierra worked at our casting facility to consolidate their installation operations with our manufacturing process, putting their work ahead of schedule, and ultimately making it more efficient for all other trades,” according to officials at Rotondo Weirich.

SCI Benner Township is part of a broader state construction initiative that will add nearly 6,000 beds to the state’s prison system. The other prison construction project includes two new 2,000-bed prisons in Skippack Township, Montgomery County — on the grounds of the existing SCI Graterford. That prison will serve as a replacement for SCI Graterford.

SCI Benner Township is being completed through a design-build method — which has proven to save time in order to get the prison up and running quicker than the typical design-bid-build process.

SCI Benner Township is also awaiting LEED certification for its commitment to green building features throughout the facility. Solar panels were installed at the facility, along with energy and water efficient details carried out in the design and construction process including reduced heat island effect for the roof and 30 percent of water use reduction from various installations resulting in an estimated water usage reduction of 532,710 gallons per year. The storm water quality and quantity design will result in removal of 80 percent of total suspended solids for 90 percent of site storm water.

As mentioned, the project was completed in a design-build method, which William Porter, vice president of Moseley Architects has years of experience working on.

“I’ve been responsible for the design of over 30,000 beds for correctional projects in more than 30 states and overseas, including over $1 billion worth of completed design-build corrections construction projects.”

Using a design-build was a new process for the Pennsylvania Department of Corrections, or DOC, which resulted in initial challenges for both the design team and the DOC.

In order to overcome the difficulties of working on the major project, Porter emphasized the importance of having a trustworthy team.

In order to see desired results the DGS and DOC provided the design-build team with the most comprehensive set of bridge documents that Porter had seen to date.

“This (bridge documents) reduced the time and cost of design during the proposal process, but limited the amount of creativity that we could bring to the table,” he said. “However, immediately after contract award, the entire team including DGS, DOC, design builders, architects, engineers and subcontractors, refined the design.”

Porter explained that through a series of design workshops, participants offered ideas for consideration by the entire team. The team adopted several ideas including site plan revisions to reduce the potential for construction delays and also to improve operational safety and efficiency. The team also looked closely at the Transportation Hub plan, the clerestory window layout, door locations, electronic security details and LEED choices, and revised them accordingly.

Rotondo Weirich also applauded Hensel-Phelps for taking control of the situation in order for the team to function effectively.

“With any design-build project, coordination is important and Hensel-Phelps did an excellent job of integrating specialty contractors to design and build the best facility possible for their client,” said Kevin Zynn, director of operations for project management at Rotondo Weirich.

While the design-build process proved itself challenging for some — general contractor Hensel-Phelps Construction Co. found one of the greatest challenges to be the schedule, according to project manager Jeffrey Sandeen.

“The project team had basically nine months to get 26 buildings built and dried-in before the winter,” he said. “The first foundation was placed in March 2011 and by mid-November 2011 all 26 buildings were dried-in.”

In order to finish the project in the desired timeframe the team broke the project into five separate crew flows and worked them as independent projects, according to Sandeen.

Sandeen has worked on four other Federal Bureau of Prisons (FBOP) facilities in the past — but SCI Benner Township’s complex security measures were different from other projects that he has been involved in.

“FBOP projects I had worked on in the past had only one perimeter monitoring system,” Sandeen said. “The prison has top-notch security, definitely more so than I have seen in the past.”

“Certain areas of the housing units had more stringent specifications based on the classification of inmate,” he said.