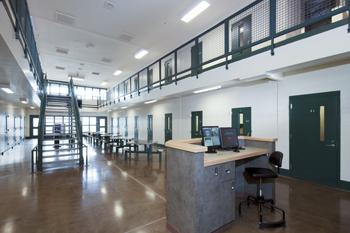 Completed in fall 2011, the $48 million facility — the sixth to be operated by the Blue Ridge Regional Jail Authority (BRRJA) — not only helps to alleviate overcrowding, but also brings needed jobs to the area. And not just construction jobs, but 128 jail staffing positions as well.

Spanning 170,000 square feet on a 23.5-acre site in Madison Heights, Va., the Amherst County Adult Detention Center is a one-story, above-ground structure with a basement area utilized for the maintenance department and storage. It is comprised of two localities that joined the BRRJA: Amherst County, Va. and Appomattox County, Va. The new facility replaces the existing Amherst and Appomattox jails, as well as an inmate camp in Moneta, Va.
“Both of these localities operated their own individual jail under the sheriff for each locality prior to joining the BRRJA,” says Major Karen Craig, ACADC site administrator. “The localities had essentially ‘outgrown’ the jails they had housed prisoners in. Furthermore, these jails were older and in need of refurbishing and updating. The localities determined that it would be more cost efficient to enter into and participate in a regional jail system.”

Housing 380 inmates —both male and female, and with a core designed for 460 — the new detention center was designed by Richmond, Va.-based Moseley Architects, which started on the project in early 2008.

“The facility uses a hybrid solution combining direct and indirect supervision for the medium- and maximum-security general population housing units,” explains Carrie Henaghan, project manager at Moseley Architects. “The minimum-security and work release housing units are dormitory-style, direct supervision. A separate classification housing unit is included adjacent to intake for inmates to live in until they are appropriately classified. Special housing in (segregation) consists of three units for men and women, plus medical cells.”

Oldcastle Precast, a manufacturer of precast concrete in the U.S., completed the precast cell contract for the ACADC and was so successful with the project that it is now manufacturing more than 250 rear-chase, precast concrete jail cells and 12 shower modules for another Virginia detention facility—the Rappahannock Shenandoah Warren Regional Jail in Front Royal, Va.

Early on in the design process, Moseley Architects discussed the possibility of Leadership in Energy and Environmental Design (LEED) green building certification with the BRRJA. After learning about the program and hearing the potential benefits, the Authority decided to pursue certification for the facility.

Energy efficiency upgrades were evaluated using whole building energy modeling to optimize wall and roof insulation values. Energy recovery technology was added to capture thermal energy from exhaust air. Efficiency was also improved by using variable frequency technology in the mechanical systems, and high performance interior and exterior lighting systems. Overall, the facility is expected to spend approximately 17 percent less on energy compared to a building that meets, but does not exceed, the minimum energy requirements of the building code.

“In addition to the energy savings, phenomenal water savings are being realized by the facility,” says Henaghan. “By landscaping with native and hardy plantings, the need for a permanent irrigation system was avoided. All water-using kitchen equipment, including the dishwasher, ice machines, combi oven, and spray valves were evaluated and upgraded to the most water-efficient models feasible, saving an estimated 145,000 gallons per year.” 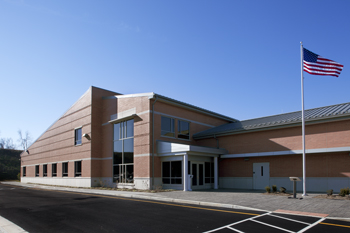 A vacuum plumbing system was discussed that offered tremendous water savings in addition to operational benefits, such as computer controllability and reduced clogging. Following a thorough cost and payback analysis, the BRRJA decided to proceed with the vacuum system for the entire facility.

Elton Blackstock, BRRJA administrator, chose the AcornVac system as a greener alternative to a traditional plumbing system, and one that is more practical for the facility in terms of controlling water costs, conducting maintenance with ease, and helping prevent excessive inmate use. The vacuum plumbing system is expected to reduce wastewater by 70 percent and overall water use by more than 60 percent, which can annually save over 3.5 million gallons of water.

“Not only do we owe it to the community to make environmentally-responsible decisions, but the operational costs that can be achieved through water and energy savings are impressive,” says Blackstock.

“The team considered and implemented many additional strategies that contributed to LEED certification including alternative transportation options (bike racks and preferred parking for fuel-efficient vehicles and carpools), stormwater management upgrades, and roof covering materials that reflect heat, as well as specifying low-emitting building materials that contain recycled and regional content,” says Carrie Webster, sustainability coordinator with Moseley Architects. “In the end, the general contractor [Hitt Contracting Inc.] documented that over 20 percent of the building materials by cost incorporated recycled content, and 35 percent of the building materials were regionally manufactured and sourced.”

As a result of the teamwork between the Authority, design team, and contractor, the project achieved LEED Silver certification, making it the BRRJA’s first LEED-certified facility. 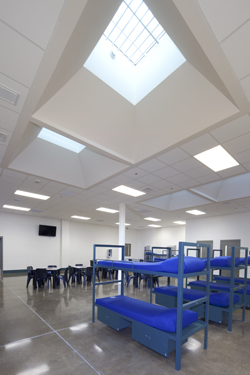 Blackstock says that both he and the staff are pleased with the results. “Controlling costs on a building that’s open 365 days a year is a challenge, but I feel like we made sound decisions that will quickly pay for themselves.”

Adds Henaghan, “The owners, building users, architects, and engineers were focused on determining the most energy-efficient options that complied with the facility’s security requirements,”

Enhanced Security
The new facility started moving in inmates in mid December 2011. Utilizing direct supervision, some of the enhanced security features at the new center include exercise areas for each housing unit to minimize inmate movement in the facility, video visitation, and a secure evacuation area outside of the facility in case of fire or other emergencies. The biggest design challenge of the project actually related to the direct supervision concept.
“It was developing a one-level plan from a site that sloped steeply on all sides down to a stream traversing the site,” recalls Henaghan. “The building pad was carved out of one side of the site, which sloped 100 feet down to a protected wetland.”

Minimizing the impact to the wetland was essential, so the pad became long and narrow. This dictated the long, narrow building design with a central corridor reminiscent of the “telephone pole concept” prevalent in correctional projects many years ago before direct supervision.

“The design, however, incorporated direct supervision for the majority of the housing units,” she says. “The central circulation spine is approximately 600 feet long, with master control at one end, providing a view down the entire length.”

Other safety and security measures implemented include segregation units with a control room between the two units. Each cell has a camera that makes monitoring inmates much easier as well as safer.

“The doors to each cell slide rather than pop open via the control room officer,” says ACADC’s Major Craig. “This is a huge safety feature for officers.”
Video visitation is also available at this center, the only BRRJA facility with such a feature. Professional visitors, such as attorneys or probation officers, have an option to visit via video or direct contact visit with the inmates.

In the medical department, there are individual medical cells, an infirmary, two negative pressure cells, as well as exam rooms and a dental room and area. The BRRJA contracts out its physician, dental, and mental health services, which requires the physician visit the site twice weekly and assess inmates.
“This is a security feature in that inmates do not have to be transported outside of the building unless there are circumstances where the physician deems they need to be seen by a specialist or at the emergency room of the local hospital,” says Craig.

The BRRJA has, as part of its medical services contract, the provision of mental health services. A certified counselor sees inmates twice weekly and makes referrals, as needed, to the psychiatrist. The psychiatrist sees inmates via video in the facility’s video arraignment/consultation room, thus prohibiting inmates from having to be transported off site.

“Video arraignment is an extremely invaluable tool, not only for mental health services, but for court transportations,” adds Craig. “This equipment enables our site to connect with any court in Virginia that has the compatible equipment/connection and conduct arraignments for inmates, thus saving money in transportation costs and increasing the safety and security of the staff and inmates.”

A separate law enforcement lobby is situated directly outside of the intake department and inside of the vehicle sallyport area. This area provides a secure cell as well as benches with security bars for arresting officers, while obtaining the necessary committal paperwork from the Magistrate, whose access window is in the lobby area.

A final safety and security measure is that shift supervisors are required to have their officers change posts every four hours.
“This prevents inmates from getting too familiar with a particular officer,” says Craig. “And it helps officers from becoming too lackadaisical in the performance of their required duties, as well as helping them to be more alert and aware.”