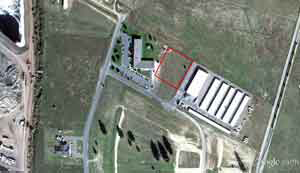 QUINCY, Calif. — Plumas County Sheriff Greg Hagwood has been on a quest for a new jail since becoming interim sheriff in 2009. After winning the following election, the lead law enforcement official in one of the Golden State’s smallest counties has been on the lookout for a new facility.

The current county jail has capacity for 37 inmates and features an extremely outdated structure and an equally less-than-ideal location, with the back fence of the yard area standing less than one block away from local Little League fields. Time has passed the structure by and its limited floor plan has made it impossible for local officials to keep up with advancements in security, safety, and organizational advancements.

The facility has been the focus of county grand jury reports for over two decades, but replacing the only jail in a county with just over 20,000 residents during a national financial downturn has been all but fiscally impossible.

Hagwood hopes his luck is about to change, as the state of California has recently released a round of grant funding for small counties looking to replace jails, with a total available allocation of $100 million. The program will earmark a maximum of $20 million for each project and Hagwood plans to apply for that amount. There are 37 counties in California with populations under 200,000, meaning they will be eligible to compete for the funding.

The sheriff’s application will call for a 31,500-square-foot structure with the capacity to house 100 inmates. The project would also include a solar installation, which would be funded upfront by a solar company, with the energy savings being split between the county and the company until the installation costs are covered.

Hagwood said the move would likely involve purchasing a piece of property from Plumas Bank, a local company, which previously ran its call center from there. The sheriff’s office and probation department would move into the existing building, leaving behind severely outdated facilities, and the new jail would be constructed on the same 4.5-acre plot.

In terms of funding the property acquisition, the sheriff said he was looking into $2 million grants from the United States Department of Agriculture, which could be serviced at around $8,000 per month over a 40-year period. That investment would also cover the grant’s requirement for $1 million in matching funds.

Hagwood said the savings involved in consolidating the two departments, selling their old offices, and moving into a newer, more energy-efficient facility would easily compensate the county for its $2 million investment and lead to a long-term savings.

The 18,000-square-foot building would constitute a major improvement over the current sheriff’s office, due to the work Plumas Bank put into it when it bought the structure.

“They’ve done a lot of work in terms of upgrading the power supplies, upgrading the electrical service, upgrading the computer server room, that meets and actually exceeds the needs that we would have. It’s ADA compliant, which is a huge issue that we’ve been facing at the jail and here at the sheriff’s department,” Hagwood explained.

“It would allow us a very smooth transition from our current location in to that facility,” the sheriff added.

An architect has not been selected for the prospective jail construction project, but Hagwood explained that he had been working closely with Dewberry, a Fairfield, Va.-based architectural and consulting firm.

“They have been very generous with their assistance in terms of needs assessment and kind of guiding us through this process,” Hagwood explained.

In terms of what a new jail would do for the county, he added, “It would address countless safety issues and ADA issues that we’ve struggled under for decades and in doing so we would provide an environment to much more effectively address the mandates and the requirements of the criminal justice realignment.”

He also indicated the change would save the county money in the long run. “We have found that trying to service a decaying and aging facility is becoming just increasingly and unnecessarily expensive.”