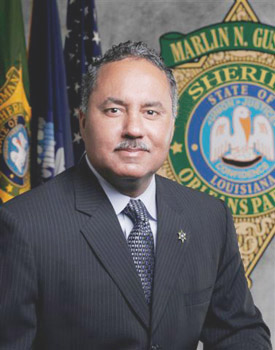 NEW ORLEANS — The security failings of the Orleans Parish Prison (OPP) are due to poor conditions of prison facilities, according to Orleans Parish Sheriff Marlin Gusman.

The prison has been under severe scrutiny since a federal court hearing was opened April 1 concerning the OPP consent decree, a proposed agreement between Gusman and the U.S Justice Department to improve conditions at the notorious jail.

Shocking footage from a 2009 video revealed at the hearing showed inmates injecting drugs and drinking alcohol with one inmate flaunting a firearm and two other inmates leaving the jail to walk around the city’s famed Bourbon Street.

After an approximately six-hour testimony last week, Gusman held a press conference regarding the controversy that arose from the released video and the consent decree.

According to Gusman, two inmates in the video have incurred additional charges from their actions — Arthur Johnson to serve another five years and Lester Jones another three years for their escape.

"The city-owned House of Detention embodied the worst aspects of inmate care and security,” Gusman said. “That is exactly why I closed that building last year and began phasing it out before Hurricane Katrina.”

Gusman said he was “ignored repeatedly” by the New Orleans mayor and city council when he pressed for the funding needed for the necessary repairs to provide a safe correctional facility.

"The mayor tries to tell you that he is building a new jail. He is wrong. The mayor is building nothing,” Gusman said. “His contribution to New Orleans’ future of secure, modern jail facilities is the empty space that you see between the two buildings that the sheriff’s office got underway following the yearlong delay of the mayor’s working group. When the mayor is not denying there is a problem, he is dragging his feet on every part of the solution.”

The sheriff said the construction of two new FEMA-funded buildings, a $81.5 million warehouse and kitchen and $134 million administration and housing building, was accomplished through the sheriff’s office with no assistance from the mayor’s office. And though FEMA provided the city with replacement of buildings that were damaged, the organization will not construct any new buildings.

Gusman has continually pressed the city for a larger jail, but city officials have said the problem lies with the administration and mismanagement of funds, not with facilities.

“In a very real way its unbelievable. I think it denotes that conditions at the time were just really dangerous and unacceptable. The issue really then gets to be about management not about money,” Mayor Mitch Landrieu said in response to the OPP video released April 3.

Tensions are running high between the sheriff and the city’s mayor, who have combative views on the reasons for the jails downfall as well as what should be done to improve conditions.

Landrieu has called for the Department of Justice to bring a federal receiver to manage the prison.

“It gets clearer every day that the Orleans Parish Sheriff’s Office is not keeping the prison secure and our city safe,” said Landrieu in a statement. “That is why I am asking for receivership so corrections experts can run the jail in a safe, secure and fiscally responsible way. I cannot in good conscience cut vital services or raise taxes to put even more money into an office where waste, fraud and abuse run rampant.”