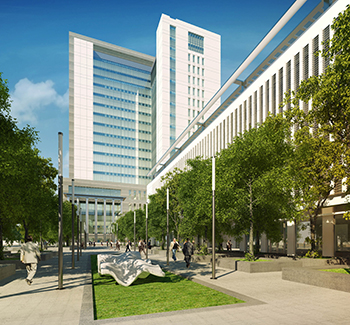 FORT LAUDERDALE, Fla. — A large-scale construction project is underway to create an efficient, flexible design with an ageless aesthetic appeal for longevity for the new Broward County Courthouse in Fort Lauderdale.

The campus will altogether offer a county office building, three courthouse buildings, an energy center and a 500-car parking garage with a 34,000-square-foot shell floor intended to accommodate future expansion as needed.

“I think the biggest thing we wanted to portray was a modern civic building with timeless architecture,” said Eric Peek, AIA, senior associate with Heery International. “It’s not trendy, not contemporary, but a modern, clean precast glass building that will look good for a long time.”

Projected to meet LEED Silver, though the county is encouraging the project to seek LEED Gold, the building utilizes 105,000 square feet of glass walls.

The new courthouse is being constructed west of the existing courthouse on what was formerly the judicial parking garage. The building also features four distinct columns, Peek said, and the designers took into account surrounding architecture as well as the increased development of downtown Fort Lauderdale and the nearby river walk.

“We tied into the urban catalyst of that development,” Peek said. “We kept things on a more human scale to make it people-friendly and environmentally friendly.”

With the complexity of various buildings and needs, accessibility for the public was also taken into serious consideration during the design stage, Peek said. While more frequented courts can be found on the building’s lower levels, courts that have longer trials or longer durations are positioned on the higher floors.

“We want to be able to streamline the process for the general taxpayer,” Peek said.
All the buildings will be connected, Peek said, and a double-stacked bridge nearly the size of a football field will allow the public, staff and inmates from the neighboring jail to have separate access to the courthouse.

“I think the most unique decision was how we sited the building and how it would function with the other buildings and remain an iconic image at the same time,” Peek said.

The former facility was without needed security measures as well as space for the growing population, Peek said.

“The agency is growing, caseloads are growing, staff is growing and the building is shrinking,” Peek said.

As the local judicial system outgrew the old courthouse, elements such as security and operations took a negative turn.

Planning for the new courthouse has been in the works for quite some time and has shown strong community initiative in its years of planning. The Courthouse Task Force Advisory Committee, which consisted of county commissioners, the judiciary, members of the state attorney’s office, the public defender’s office and the clerk of courts office, court administrators, elected officials and the local business owners, began meeting in January 2009.

The long-awaited courthouse, with its complex and efficient design, will surely be welcomed.

“It’s a really unique system and it is all going to be tied together, but I think the unique thing is that while all that’s going on you have this singular iconic building that’s making a grand statement,” Peek said.