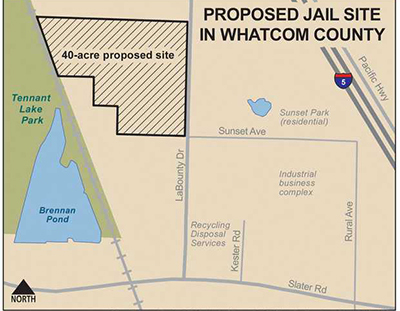 BELLINGHAM, Wash. — The Sheriff’s Office in Whatcom County is working hard to plan a new jail facility for the current overcrowded and outdated facility, which has been open since 1948. The existing jail, designed to hold 390 inmates, is facing significant overcrowding issues related to the county’s significant growth in the last 30 years and increased recidivism. Because of this overcrowding, many inmates with minor charges have been released early to free up space for other inmates who need to serve time.

Although a new facility—known as the Work Center—was constructed in 2006 to temporarily house up to 150 minimum-security inmates, it couldn’t keep up with the rate of inmate growth the county faced. As the jail became more overcrowded, more fights and assaults broke out amongst the inmates, and the spread of disease became more pronounced. The facility itself, originally constructed to hold 148 inmates, also degenerated more quickly.

The county has implemented several plans to help decrease the overcrowding in the facility. Pre-trial supervision, work crews that spend the night away from the main jail, electronic monitoring programs, work release and school release programs, community service sentences, a drug court system that releases offenders of their sentences if they complete special programs, and the Misdemeanant Behavioral Health Unit are all tactics the county has taken to help reduce the number of inmates housed in the jail.

These methods weren’t quite enough to keep the overcrowding issue at bay, however, and plans for the new jail began back in 2011 when the Jail Planning Task Force (JPTF) was created. After discussing the issue at length, the JPTF faced the Whatcom County Council and described the necessity for a new jail in the county to accommodate the increased volume of inmates in the current facility.

Construction on the new jail facility has been in the works for several years, and is estimated to cost around $79,110,079. With additional expenses factored in, such as the cost of various building permits and property tax in addition to the construction costs, the project is expected to be a grand total of $109,276,144. Yearly operational costs are expected to sit around $14.8 million, which is a 17 percent increase over the current annual cost of operation.

The project is currently laid out in three phases. Phase I consists of constructing a new jail facility equipped with 521 inmate beds spread out over 12 new units. Construction on this part of the project is slated to be complete in 2017. The project team hopes to have at least half of the construction work done by 2016. While the county is estimated to have 649 inmates by the year 2026, the project team and sheriff’s office is currently planning to construct the jail for 521 inmates. Their goal is to decrease the number of inmates and render the call for additional beds unnecessary.

With work underway to design the new facility for Phase I, the project team plans to design two of the new units to house inmates with special needs, such as those with mental illnesses. The space will be much better equipped to care for these inmates, according to Lori Coppenrath, the consulting jail planner for Whatcom County.

The project team has a few more steps to take before construction can really begin, however. Now that they have a solid estimate of the cost of the project, they must submit an environmental impact report. Discussion is currently underway regarding the location of the new site as well. Current debate favors the property on LaBounty Dr. and Sunset Ave. Whatcom County has until December to purchase the $7 million property before it opens to the public market.

The biggest issue facing the county and the project team, however, is that of funding. The initial major expense of the construction project itself combined with the increased yearly cost of operation poses a problem for the county as they search for solutions to the issue. Debates are ongoing regarding the idea of an increase in sales tax, but no decisions have been made as yet. Jack Louws, County Executive, recently issued a positive comment on the ongoing funding debate: “I’m looking forward to engaging the council, the cities and, of course, the community members over the next few months to find the best path forward for us as it relates to paying for and operating this particular facility,” he said.

County officials will present the environmental impact report to the public on Sept. 26 in Ferndale at 6 pm. at the Fernade City Council chambers. After the officials issue the report, the public will have until Oct. 14 to comment.