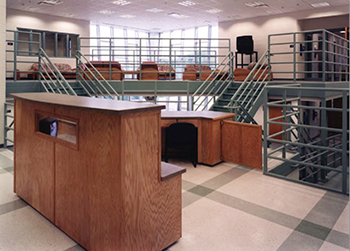 PORTLAND, Maine — The new New Hampshire women’s prison will be built by SMRT Inc, based in Portland, Maine, to create a program intensive correctional facility and replace the outdated, controversial current prison.

The Executive Council unanimously approved a $2.4 million contract with SMRT to design the 224-bed prison to be built in Conord, N.H. The firm holds much experience in designing correctional facilities throughout the northeast and utilizes a similar behavior based programming model.

“We believe strongly that environment does affect behavior,” said Arthur Thompson, AIA, principal at SMRT. “We design our facilities to have a more normalized environment especially as behavior improves.”

The current New Hampshire State Prison for Women in Goffstwon, N.H. has been a subject of controversy in the New Hampshire Department of Corrections. Four women incarcerated in the state prison filed a lawsuit last year claiming that the prison does not provide female inmates with services and programs comparable to male inmates.

“Everyone is really just falling over each other,” he said. “It’s a very, very small facility for the number of inmates they have.”

According to Thompson, not only is the prison not built to current standards, but also the infrastructure cannot be improved to current standards through renovation. The current building also does not reflect the new direction the state’s corrections department would like to take which is more focused on rehabilitation and treatment rather than punitive focused.

“Since its an old jail, its not architecturally built to any kind of standard that we would employ today,” Thompson said. “It’s an old hard jail. There’s no way you can change it, there’s no way you can easily modify it to make it a more normative environment or more program oriented facility.”

The new prison will place special emphasis on providing programming in a normalized environment. The design team will have a very interactive programming and planning process in the early phases of design to define what the upcoming facility will provide, Thompson said.

The firm will also pay special attention to the gender specific needs of inmates, which has evolved the design of female correctional facilities, Thompson said.

“Women come to corrections very differently from men and they respond very differently to a correctional environmental,” Thompson said. “In part because a great many come from a situation of abuse, so when they come into a correctional facility its got to be really gender responsive to the women. In other words, the inmate needs to feel safe before they start working on programs that will enhance their chances of a positive reentry.”

The firm has designed four county jails in New Hampshire as well as the Women’s Center in Windham, Maine. Thompson believes that the success of the women’s correctional facility in Maine, along with the diversified and dedicated staff at SMRT, is what won the firm’s contract.

“The women’s facility that we did in Maine I’m sure impacted their decision because there are very few purpose built new female facility models that have been done in this country that are really based on the current best practices and evidence based research that has really come together in last 10 or 15 years in the area of women’s corrections,” he said.

The design of the new facility, which is expected to cost $38 million, is expected to be complete in 2014 and construction is set to end in late 2016.