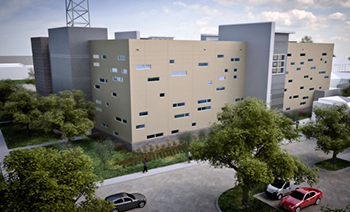 DENTON, Texas — The first phase of the $26.7 million expansion and renovation of the Denton County Jail is well underway and should be completed in September.

The project includes 87,000 square feet of new construction and more than 2,800 square feet of renovation. The new four-story building is being constructed primarily of concrete masonry unit blocks with a metal roof. It will feature 384 beds in single, double and open dormitory-style cells. A special needs cell unit will be constructed of precast concrete, capable of housing certain high-risk inmates and those with health concerns. The new building will also feature shell space, day rooms, cell pods, and multipurpose and support spaces.

““If medical needs housing for inmates with special considerations, whether their physical health or mental health, we’ve designed this unit to meet those needs,” Davenport said.

An express corridor will connect the new building to the existing pre-trial building and the old jail. The project includes renovating the corridor in the two adjacent buildings as well as remodeling part of the Horn Government Center to provide public video visitation.

The jail will house the highest security inmates and is being constructed to facilitate that setting. Davenport said that even high-risk inmates could earn the chance to be housed in the open dormitory-type setting. He said that the open cells are the most cost-efficient and will provide for overall better security with the building’s design, reported the Denton Record-Chronicle. The facility will use direct supervision in which an officer will be staffed around the clock at a workstation and will make perimeter checks.

“We’re in a neighborhood environment, in a professional environment associated with the courthouse, and we can maintain the same or greater level of security and still have a soft exterior,” he said.

The project work includes reconstruction of fiber optic data and communications cabling that will connect all buildings in the complex. It also includes significant utility and site drainage renovations. S&P constructed a working 3-D model for existing underground conditions to enhance the coordination of the new work.

The new jail will replace the four wooden barracks built in the early 1990s that have been housing the county’s additional inmates and will provide room for growth. According to the Davenport, the jail will be half full when inmates and staff are moved to the facility in September.