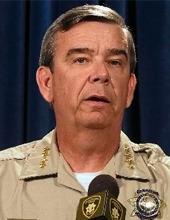 Douglas C. Gillespie, Sheriff of Clark County, Nev., has received the 2014 Ferris E. Luca Award for Sheriff of the Year from the National Sheriff’s Association (NSA). The honor will be presented to Sheriff Gillespie in June at the NSA’s Annual Conference in Fort Worth, Texas. Sheriff Gillespie is a 30-year law enforcement veteran and is currently serving his second term as Sheriff of Clark County. He was first elected in 2007, after working his way through the ranks of the Las Vegas Metropolitan Police Department. Gillespie is a member of the National Sheriffs’ Association, and sits on the Board of Directors and Executive Committee. He is also part of the Association’s Legislative Committee and Immigration and Border Security Subcommittee.