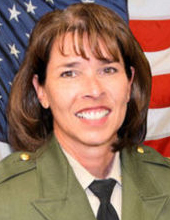 Chief Deputy of Corrections for Imperial County, Calif., Jamie Clayton has been named the National President of the American Jail Association (AJA). Clayton received the honor at the organization’s annual meeting in April 2014. Clayton began her career in 1985 as a records clerk with the San Joaquin County Sheriff’s Office. She rose through the ranks and was later named correctional lieutenant. In 2010, Clayton was brought on as a correctional captain with Imperial County, and was promoted to Chief Deputy in 2013. Chief Clayton holds a bachelor’s degree in administration of justice, and is a certified jail manager with the AJA. She is also an adjunct faculty member with Imperial Valley College and Humphreys College, teaching criminal justice courses.