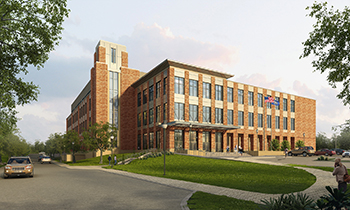 TORRINGTON, Conn. — Construction on the new 183,600-square-foot Litchfield Judicial District Courthouse in Torrington is currently underway. Farmington, Conn.-based KBE Building Corporation, the company overseeing the $67.8 million project, began erecting structural steel for the new building in May. The facility is scheduled for completion in next summer.
Correctional News spoke with Todd Orr, courts designer for Phoenix-based DLR Group, the architect on the project, about the new courthouse design and why it is beneficial to the Torrington community.
Q: What is the main goal of the project?
Orr: The main goal of the project is to consolidate court operations under one roof. The new facility will replace four separate buildings — the historic 1889 Litchfield Courthouse, Bantam Superior Court, a juvenile court in Torrington and the Family Services Offices — that currently house court operations. All but the historic courthouse is currently in-lease space. The clear benefit for citizens and users of the new courthouse will be the ability to serve all of their justice needs in one, state-of-the-art location. In addition, the courthouse will breathe new life into the area of Torrington where the building is sited. Located just outside the urban core, the courthouse makes use of a vacant parking lot that will now be active and will be a good neighbor to the adjacent residential community.
Q: What are some of the key design elements involved?
Orr: Creating a user-friendly and operationally efficient facility was a top priority in the design process. The team was tasked with establishing on-floor adjacencies that allowed like departments to serve the public on a single floor. For example, all criminal court support functions such as the Clerk of Court Criminal Division, the Criminal Division of the State Attorney and the Victim Advocate offices as well as the judges’ chambers and criminal courtrooms are all located on a common floor. Interaction among the various departments, the public and the judiciary is achieved without the need to navigate to other parts of the building. In addition, all staff movement within the facility is accomplished without moving through or into the public circulation corridors, enhancing the safety of those that use the facility every day. While this is common practice with modern courts planning, the high level to which this is provided in this facility is unique.

The project team also wanted to make the public experience simple and clear, with the building doing most of the heavy lifting when it comes to wayfinding and usability. The public circulation system is well defined and is highlighted by a commuter stair that provides access to all floors, not just a connection between the first and second floors. Making the building walkable with a daylight-filled stair tower reinforced sustainability goals and reduced the dependency on the public elevators. All key points of entry along the public corridor, such as courtrooms, are clearly marked with elements of the interior architecture. The use of materiality and the careful crafting of the building interior define destination points in a way that is far more powerful than relying on signage alone. The building is well organized and intuitive, even for first-time users.

Q: What new technologies will be included in the new facility?
Orr: To support the goals of enhancing usability for the visiting public, a series of electronic docket monitors are used throughout the building to communicate time and location of all courtroom activities. At the ground floor, adjacent to the main information desk, there will be three large-scale docket monitors (similar to the destination monitors at the airport) that will provide information for the entire building. Smaller individual monitors will be located at each courtroom entry, giving more specific information that pertains to that courtroom only. In both cases, technology is integrated into the design of the interior architecture in a way that is accessible and adaptable in the future.
Q: How many holding cells will the facility have upon completion?
Orr: There are two types of holding areas in the courthouse: Court Floor Holding, located on the upper floors of the building and located between pairs of courtrooms, and the main cellblock or Central Holding Area, located in the lower level of the building. A typical court floor holding area has four cells on average for a total of 19 cells. The main cellblock area has 22 holding cells. The building total is 41 holding cells.
Q: What have been the biggest challenges on the project, and how will the team overcome these challenges?
Orr: The biggest challenge the project team faced was working through the logistics of placing a large building program with mandatory parking requirements on a small, L-shaped site that was adjacent to low-scale residential areas. While a taller, more vertical building would have been appropriate in a more urban setting, the team wanted to ensure that the building complemented the surrounding context, which meant keeping close tabs on the scale and massing of the courthouse. Since the new Litchfield Judicial District Courthouse used the design-build project delivery method, KBE Building Corporation and the [architecture and engineering team] were at the table together to explore options to unlock the site’s potential. The result was developing a parking deck on the northern portion of the site that took advantage of the natural grades to create two levels of parking for staff. This solution not only maximized the building footprint to achieve desired on-floor departmental adjacencies, but preserved portions of green space to create buffers to the adjacent neighborhood and exceeded site requirements for impervious area.