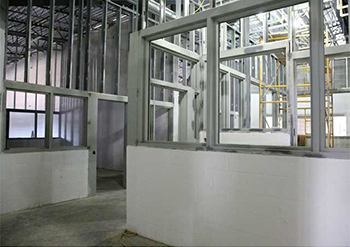 GAINESVILLE, Ga. — A new home for the Hall County Correctional Institute is scheduled to debut in November. Plans for a new facility have been in the works for about five years now, and construction finally started in March 2014.

Augusta, Ga.-based Studio 3 Design Group is serving as the architect on the project, while an inmate mobile construction crew is doing construction. As such, the county is building a $6.5 million facility for $3.2 million by using the Georgia Department of Corrections inmate labor program, according to Walt Davis, warden for the facility.

The new facility will replace the about 60-year-old outdated correctional institute. Built in 1963, the old facility had already been remodeled in 1982. The county opted not to remodel this time because of its age and the amount it would cost to renovate, reported The Gainseville Times.

The new facility will have 200 beds (compared to the current 240 beds) made from four cellblocks that will house 50 inmates each. Davis said that the new facility’s size and location determined the capacity number. Plus, there are fewer inmates in the system after Hall County’s started its criminal justice reform efforts.

Being built with SPLOST funds, the 27,000-square-foot facility will have a complete jail management system, fully electronic locking and full climate control — providing enhanced security and efficiencies for the county. It will also feature laundry operations on site, as opposed to the old facility where laundry had to be completed in a different building.

Additionally, the facility will include a special transitional housing unit for the new Re-entry Accountability Court Transition (REACT) program. The program began in 2014 and provides an opportunity for inmates returning to the area from state prison to get intensive programming, educational upgrades and employment before their release.

The facility will also continue to house inmates used for inmate work details throughout the county. About 40 to 50 inmates work daily for county departments, performing a multitude of job tasks. In 2013, these details provided more than $2.5 million in free labor to the county, according to the county website.

“I think that it’s build to a higher standard than facilities were built 60 years ago,” Davis said. “I think the design standard and the whole design functionality has improved, offering a more comprehensive approach. [The new facility] has a central control unit for staff to be able to observe all inmate movements throughout the facility and to have proximity for both indirect and direct supervision with officers. The entire way the facility’s designed lends itself to better security.”

So far, the project is on schedule and in budget, and Davis said the project team hasn’t had a significant challenge yet. Work that still needs to be completed includes major infrastructure elements such as the jail management system and electronic locking.

The county currently pays about $36.42 a day for each inmate, but that number shouldn’t increase too much with the new building, reported The Gainesville Times. However, the building’s new and efficient design will help utility and electricity bills decrease.