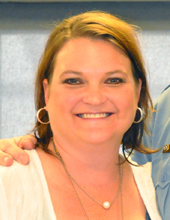 Sterling Correctional Facility Facility Parole Officer (FPO), Leslie Keisel received the Tom Clements Memorial Award May 4 during National Corrections Officer and Employee Appreciation Week. The award embodies the vision of recovery and reintegration in which Clements strongly believed, and is presented to a Colorado Department of Corrections (CDOC) staff member who demonstrates leadership, integrity, teamwork and effective communication skills with offenders. Keisel is one of two FPOs assigned to SCF. At the inception of the re-entry units at SCF in September of 2015, Keisel spearheaded what are now known as monthly, Community Re-entry Fairs. She used her years of experience as a parole officer to make contacts with multiple outside agencies. Because of her belief in the program and her dedication to making it successful for offender re-entry, she was able to elicit an overwhelming response. Since November 2015, SCF has held six Community Re-entry Fairs, reaching more than 400 offenders and more than 18 collaborative relationships have been developed with governmental and community participants.