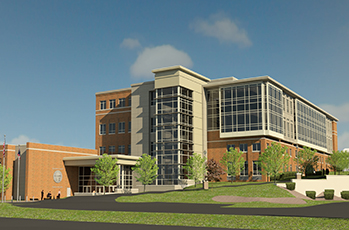 DELAWARE, Ohio — The new $38 million Delaware County Judicial Building currently under construction in Delaware will combine a majority of county governmental services under one roof, providing better transactional relationships for court and administrative tasks. The project broke ground last fall and is scheduled for completion in spring 2017.

Correctional News spoke with Jeremy Jones, AIA, project architect for Charleston, W.Va.-based Silling Architects, the architect on the project, about the facility’s design and how designing courthouses differs from other justice projects.

Q: Why is the new judicial building necessary for Delaware County?

Jones: Typical of many historic courthouses, the existing facility is overcrowded, limited in security and accessibility, while having outdated technology and systems. There are also operational inefficiencies because of the departmental separation in different buildings throughout town. Life-safety improvements are paramount while providing an advanced level of security and being fully compliant to accessibility standards. The judicial annex is to be the central facility for the county’s courts campus.

Q: What were some of the key elements you considered when designing the project?

Jones: This project really needs to blend seamlessly with the existing context. Cues were taken from the overall character of downtown Delaware with an emphasis of similar materiality as the neighboring Hayes Administrative building and a nod to the existing historic courthouse’s Italianate detailing. There was significant feedback from the local Historic Preservation Commission as well as members of the community throughout the design process. The scheme landed on a nice blend of expansive glazing (representational of the transparency of the courts) and strong, solid building materials for the envelope. The integrated subterranean parking structure was a primary request from the county, allowing for secure staff parking serving the entire courts campus while working to offset the public and staff surface parking that would be lost given the building’s location and footprint.

The building will be home to three large common pleas courtrooms and six smaller hearing rooms — all with state-of-the-art audiovisual technology. Secure holding cells, judges’ suites, attorney conference rooms, jury assembly spaces, jury deliberation rooms and mediation spaces as well as the county’s clerk of courts and probation offices will support the courts. The exterior parking deck will also be structurally capable of supporting a three-story addition on the south side of the building for future growth.

Q: What are the key differences between designing a judicial building and designing more mainstream facilities? 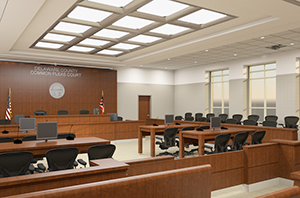 Jones: The best practice of designing a modern judicial building requires complete separation of circulation zones for public, secure staff and in-custody litigants with both physical partitions and access control monitoring. Secure vehicular entry is provided into a sallyport adjacent to central holding at thelowest level of the facility. This allows for vertical transport of detainees to intermediate holding cells between court sets. There is typically a single point of public screening, so planning for the convergence of people entering and exiting the building is rather involved. There are also the complexities of the courtrooms themselves being one of the most elaborate and technically developed spaces in any building type. This includes audiovisual design for evidence presentation, remote testimony, video conferencing, digital switching and court reporting, sound enhancement and assisted listening devices fully integrated into the courtroom millwork.

Q: Were any green building elements considered for the project?

Jones: The owner and the design team had early initiatives of meeting the 2030 challenge as an original project goal. It became apparent in the early stages of estimating that budget restraints would not allow this to be fully realized. However, sustainability goals were discussed, created and achieved to the greatest standard that the budget would allow. Several design initiatives included high-performance MEP systems with perimeter radiant heating, LED lighting controls, extensive glazing with sun control devices for daylighting of public spaces and offices and a highly insulative envelope that exceeds current energy codes.

Q: What challenges have you encountered on the project thus far?

Jones: As far as the design process, breaking down the massing of the building to be appropriate in scale to the adjacent residential neighborhood was critical. This was further compounded by the fact the original building program was too massive to fit in the site’s footprint at an appropriate scale with the requested amount of parking that the county desired. There was also the typical value engineering efforts to keep the project in budget along with a very aggressive project schedule requiring separate bidding packages.

Q: What have you learned from the project thus far?

Jones: Delaware County obviously has a great working relationship between all court related departments — judiciary, end users, facility managers and the board of commissioners. It takes a huge collaborative effort to get something of this magnitude planned and an even greater effort to carry it out through completion. Excellent communication between the design team and the design committee has continued since inception, and all involved parties have united to make this project successful. Community leaders and members have contributed with design input of what the desired end result would be, and it will be exciting to see how it plays out.