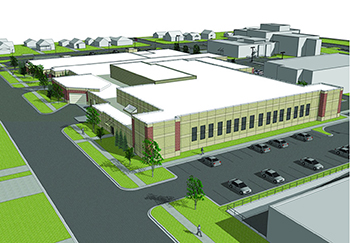 MOORHEAD, Minn. — Law enforcement, justice and correctional facilities in Clay County, Minn., will soon be consolidated as the county prepares to construct a new jail and law enforcement center in Moorhead. The project will help centralize services, placing the Clay County Sheriff’s Office, the Moorhead Police Department, the county courthouse and a new jail all within a roughly six-block radius.

Clay County’s existing joint law enforcement center — which houses the sheriff’s department, city police and the county jail — is too small to keep pace with growth. The aging jail suffers from both overcrowding and poor facility conditions. Although the facility was designed for 65 inmates and includes a nearby annex with space for an additional 30 low-security, work-release inmates, correctional leaders regularly need to house nearly 60 additional inmates in neighboring county jails. Housing inmates off site costs approximately $55 per day per inmate, which does not include costs to transport inmates back and forth to court hearings.

In contrast, the new jail — designed by Klein McCarthy Architects with offices in Minneapolis and Bismarck, N.D. — will contain upwards of 200 inmate beds and will meet all current building and correctional codes. It will consist of multiple housing units, featuring both direct and indirect staff supervision models. The facility will also house a variety of inmate programs, medical areas, laundry and food services, inmate intake/release areas and also a secure courts holding area. It will be connected to an existing underground inmate transfer tunnel that will link to the nearby county courthouse, helping maintain a sense of government within the existing campus, according to the Klein McCarthy Architects website. The new Joint Law Enforcement Center will have access to this tunnel as well.

To accommodate the sprawling complex, Klein McCarthy Architects proposes to close off one city block in the existing county government campus. The project will also necessitate the demolition of more than 20 residential homes to make way for the new facilities and parking areas. Klein McCarthy Architects has assured the community, however, that the variation in massing throughout the new complex as well as using a mixture of exterior materials will help to maintain a human scale within the primarily residential community.

Purchasing and demolishing the homes accounted for approximately $4 million of the total $52 million project budget. This latest total estimate is roughly double the number county administrators estimated in early 2015 at the project’s outset when the county budgeted $30 million for the new jail and $12 million for the new law enforcement center. While funding mechanisms for the project will not be officially determined until a Nov. 8, 2016 vote, the home demolition portion of the project is set to take place this fall. The November vote will decide if the project will be funded in part via a 20-year, half-percent sales tax or a property tax hike.

Following home demolition and site preparation, construction on the new jail could begin as early as spring 2017. Construction on the law enforcement center is slated to begin in fall 2017, with both projects aiming for a fall 2018 completion.