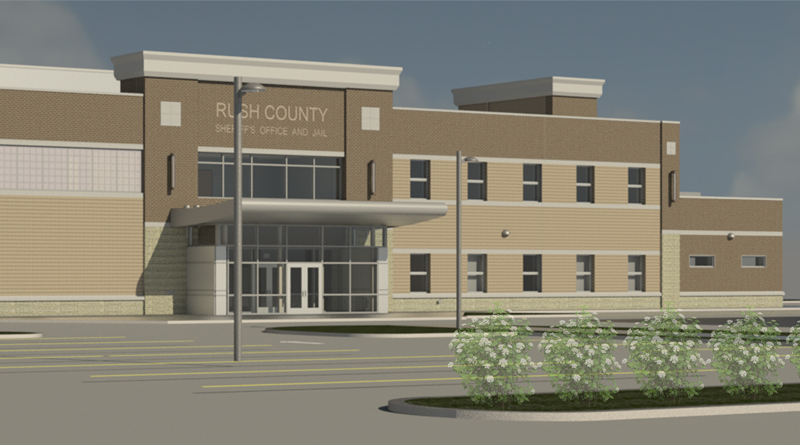 The Rush County Jail project was approved on Oct. 31, 2016 and is expected to break ground in late January or early February 2017. Photo Credit: DLZ Architects and Engineers

RUSHVILLE, Ind. — The Rush County Jail project in Rushville is now one step closer to its groundbreaking. The project is the result of a successful collaboration between Rush County Sheriff Jim Cowan, members of the county’s Community Corrections Department and city officials. The Indianapolis office of DLZ Architects and Engineers will be responsible for the design of the approximately $20 million jail.

In fall of 2016, Eric Ratts, AIA, principal architect for DLZ, requested that county leaders approve his request to seek bids for the demolition of existing buildings between Main Street and Perkins Street in order to prepare for the Rush County Jail project. After leaders agreed to the demolition, final plans for the project were submitted and as of press time it is anticipated that the jail project will break ground in late January or early Feb. 2017.

With an emphasis on addressing mental health and addictions, the 139-bed design incorporates an extensive medical housing unit, according to Ratts. The 54,630-square-foot jail project went to bid for construction services on Dec. 20, and as of press time was set to announce the construction team on Jan. 9, 2017.

Highlights of the design include alternate housing for work-release inmates; an indirect podular remote general housing concept; additional space for the county coroner, community corrections and 911-dispatch; and a training center.

Another component that makes the project stand out is its physical site. Located in a historic downtown area, the jail will be easily accessible and is anticipated to help revive a blighted area in downtown Rushville, according to Ratts. The location of the new jail will be adjacent to both the courthouse and the probation department.

The city of Rushville was also just named a “Stellar Community” by the state of Indiana. The Indiana Stellar Communities Program (ISCP) launched in 2010 and is a multi-year, more than $58 million (investments to date) initiative operated by the Indiana lieutenant governor’s office and funded by three state agencies: the Indiana Housing and Community Economic Development Authority, the Indiana Office of Community and Rural Affairs and the Indiana Department of Transportation. According to the state’s website, the lieutenant governor’s office recognized a need for “more innovative, comprehensive development efforts in rural communities in Indiana to meet the unique local needs and make a bigger impact.”

Ratts explained that choosing the downtown location for the new jail bodes well for the city’s efforts to meet the goals of growing the infrastructure of downtown Rushville. By having the civic and justice presence located in such a close proximity it also severely reduces transportation time and costs.