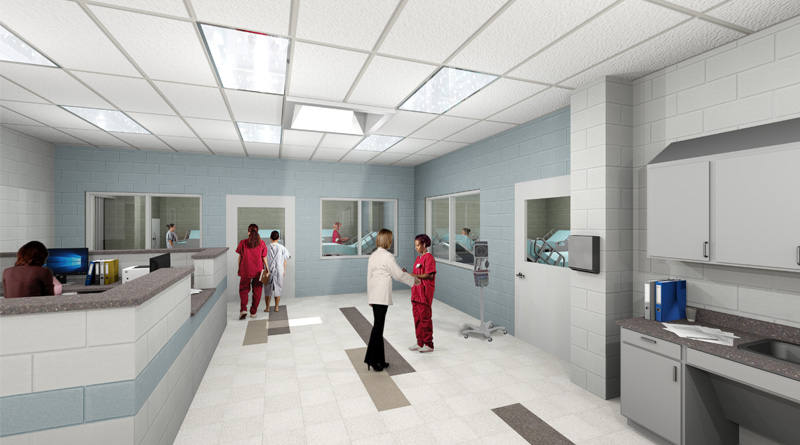 CONCORD, N.H. — The long-awaited New Hampshire Women’s Prison in Concord is in the final months of construction, projected to be complete by the end of this year. In addition to being an overall upgrade from the previous women’s facility, the new prison will also have a significantly improved health care facility, with a focus on mental health, rehabilitation and an atmosphere intended to promote healing and normalization for inmates.

The 100,000-square-foot prison has a budget of $47 million, with SMRT Architects in Portland, Maine as the architect on the project, and Gilbane in Merrimack, N.H., as general contractor. Pulitzer Bogard & Associates in New York served as planning consultant. The new prison will house 224 inmates when complete. Current inmates are being held at an out-of-date facility in Goffstown, N.H., in the former Hillsboro County jail for men.

“The old facility was built in the late ’70s and doesn’t have any of the benefits of behavior-based research that we have today,” said Arthur Thompson, principal architect at SMRT Architects.

The health care facility in the new prison takes up approximately 11 percent of the total footprint of the prison, which is significantly above average, according to Thompson. The health care facility has a complete infirmary, a mental health crisis stabilization unit and “has all of the outpatient facilities that you would see in a major jail or prison,” according to Thompson, referencing the small size of the new prison in relation to its impressive health care offerings.

The new health care facility has four separate exam rooms focused on different needs: general needs, trauma and minor procedures, physical therapy and basic triage. It has a dental suite with two dental chairs, a full dental lab and full X-ray capabilities. The capacity for radiology within the prison will prevent sending inmates out to external hospitals not connected to the prison. In addition, there is a medication room where the majority of inmates will come to receive their medication, as well as a significant medical storage room. There is a four-bed inpatient infirmary with dayroom support space for inmates who need to be separated from the general population of the prison, with a full isolation suite. There will be 24-hour medical and security staff to keep the health care facility operating smoothly, with a low ratio of inmates to staff, which will improve the prison’s ability to offer high standards of care, according to Thompson.

The design team made significant efforts to create a health care facility that would reduce the stress levels of its patients. The design team integrated as much natural light as possible, with skylights and windows to the outside, based on existing research that having access to outdoor views contributes to overall well-being, reduces stress levels and positively impacts behavior — a principle that applies to inmates as well as staff, according to Thompson. With this goal in mind, the design team also chose materials and colors that would encourage calm and emotional well-being on the part of the inmates, with wooden doors and “softer materials.”

“I’ve had prison staff tell me that the biggest problem [in women’s correctional facilities in particular] is getting the inmates to settle down and to feel safe after their arrival,” said Thompson. “In many cases, this [facility] may be the safest environment they have ever lived in. Many of these women come from a life of fear and abuse. It can take time for these women to feel safe enough to be able to take advantage of the programs that have been developed to help with their special needs. We at SMRT believe that one way to help with this is providing a good health care environment.”

While construction of the new prison is expected to be complete by the end of the year, the opening of the facility will likely be delayed until early 2018 due to struggles with state legislation over budget approval and finding a qualified staff for the facility.