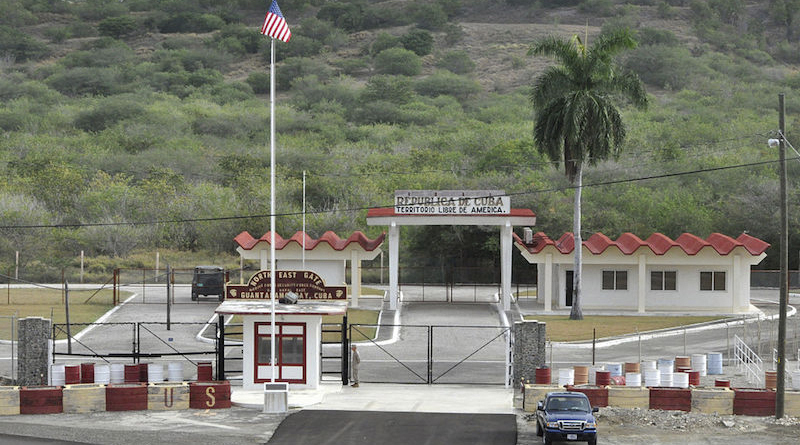 The debate over the Guantanamo Bay military prison in Cuba continues as the Trump administration attempts to draft a new executive order.

WASHINGTON — The debate over the Guantanamo Bay military prison in Cuba continues as the Trump administration attempts to draft a new executive order on handling terrorism detainees and expanding use of the prison as a result.

The New York Times reported that Trump administration officials expected to sign a new detention policy three weeks ago until the firing of Reince Priebus, President Trump’s chief of staff, on July 28. Replacing him with John F. Kelly, a retired Marine Corps general who once oversaw operations at the Cuban prison, led to new counterterrorism strategy discussions.

Military, diplomatic and intelligence agencies have been considering three potential versions of a new executive order to discuss this month. One is the version that Trump was planning on signing three weeks ago that would reverse President Barack Obama’s decision to close the prison and instead keep it open indefinitely. That version states that Guantanamo could be used to hold accused members of Al Qaeda or the Islamic State, despite warnings from national security and legal officials to do so, according to The New York Times.

A second version includes language stating that the secretary of defense can bring newly captured terrorism suspects to the prison, more clearly giving authority that appears ambiguous in the first version. The third version requires that the secretary of defense establish criteria regarding which detainees can be brought to the prison. It also states that detainees will be given periodic reviews by a six-agency, parole-like board to determine whether or not to keep holding or transfer the detainees, reported The New York Times.

While discussions about which version of the executive order to choose continue, it is unlikely that President Trump will sign any detention order for several weeks, as changes may depend on larger counterterrorism policies that are currently in discussion.

The Guantanamo Bay prison was opened in January 2002 under President George W. Bush’s administration to hold detainees from the Afghanistan War. It originally held about 780 men without trial. When the Supreme Court ruled that the judicial branch could hear habeas corpus lawsuits by the detainees, Pres. Bush began to close the prison.

When Pres. Obama took office, there were still about 242 detainees being held at the prison. Although he signed legislation to close the prison within a year, Congress blocked Pres. Obama’s plan to bring several of the detainees to domestic prisons in the U.S. Throughout his presidency, Obama continued to decrease the prison population, with 41 detainees remaining when he left office, according to The New York Times.

Even though Pres. Trump claims to bring detainees back to the prison, the administration has yet to do so this year.

Meanwhile, the U.S. military is planning $500 million in new construction at the Guantanamo Bay Navy Base. That includes a $250 million replacement hospital and barracks for 848 prison troops as well as a 13,000-migrant tent city for housing 5,000 U.S. forces, according to McClatchy DC Bureau. The Department of Defense has okayed the request, and committees in both chambers of Congress supported it. If Congress supports funding, at least the barracks would be ready by 2021.