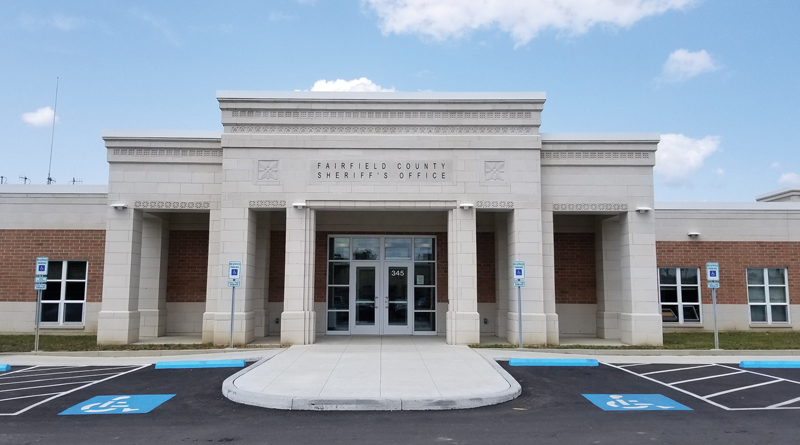 The new 384-bed Fairfield County Public Safety and Jail Facility in Lancaster, Ohio, has no razor-wire fences around it — atypical for a correctional facility of this type and size. Photo Credit (all): Granger Construction Company

The new 384-bed Fairfield County Public Safety and Jail Facility in Lancaster, Ohio, has no razor-wire fences around it — atypical for a correctional facility of this type and size. In fact, the average citizen would think the jail was maybe a college, technology center or some other common administration building, according to Dennis Keller, facilities manager for the Fairfield County Commissioners. Because of its location in the heart of downtown, this blending in with the surrounding area was something the community wanted, and the project team delivered.

The new 110,800-square-foot facility consolidates all the county jail and sheriff’s office operations into one location. Before, inmates were housed in three separate facilities. The county had to rent space from one facility owned by the state of Ohio, while the other two were owned by the county, including one housed on the same site where this new facility was built. Lastly, a fourth facility that held the sheriff’s office and civil and detective bureaus was also replaced as part of this project.

Discussions involving the need for a new facility began back in the late 1990s when county commissioners tried passing a bond issue that failed. Then, they started to take the plan for a new jail more seriously in 2013 when all three jail facilities failed a state inspection due to overcrowding. After a lot of analyzing and budgeting, construction on the $34.7 million project began in October 2015, according to Keller.

The entire project was officially completed on Aug. 20 of this year, but it was built in two phases. Since the new facility was built on the same site as an existing jail for the county, the project team had to build around the existing one that remained operational during construction. Once the new facility was completed, inmates were moved in this June to allow the construction team to demolish the original jail to make way for a 110-space parking lot.

“The sheriff’s department was operating out of three separate facilities, holding inmates and transferring them back and forth,” said Rob Train, vice president of Granger Construction Company. “The goal was to combine them into one facility and increase efficiencies in staffing and transportation.”

Designing for the Community

Consolidating all the county’s jail facilities into one was a significant undertaking. The new facility consists of 384 beds on two levels, administrative offices for the sheriff’s department, a 911 dispatch center, training areas as well as intake, booking and visitation areas, and space for the civil and detective bureaus, according to Keller. It also has four classrooms that can be used for inmate re-entry and rehab programs and outdoor recreation areas in addition to a full-service production kitchen.

“It has a unique mix of cell pods and dorm pods to allow [the county] to increase the number of classifications that it can use for people,” said Train.

The jail portion of the building is L-shaped, and the housing pods were designed so that each corridor can be observed from two staff posts. From the streets, the building looks more commercial than correctional, added McAnally. From one side of the site to the other, it dropped 8 feet in elevation. The design called for a one-level facility, so in order to save the owner money in site costs, the building was stepped. The corridor from the sheriff’s office slopes up 30 feet to the intake area, and then the corridor to the housing pods slopes up another 30 feet. From the street, no one would notice that, McAnally said.

An enclosed sallyport was also a major highlight for this project, taking up a hefty portion of the structure and making transportation of inmates quicker and much more secure, according to Keller. The sallyport is enclosed by brick walls under a roof, similar to a garage, and it has two lanes that are large enough to accommodate buses as well as six parking spaces off to the side.

“The sallyport for booking and for intake is a nice thing because [the county] really didn’t have that before,” Keller said. “It was in a fenced area, but not inside the building so to speak.”

Check out the entire article in the November/December issue of Correctional News.