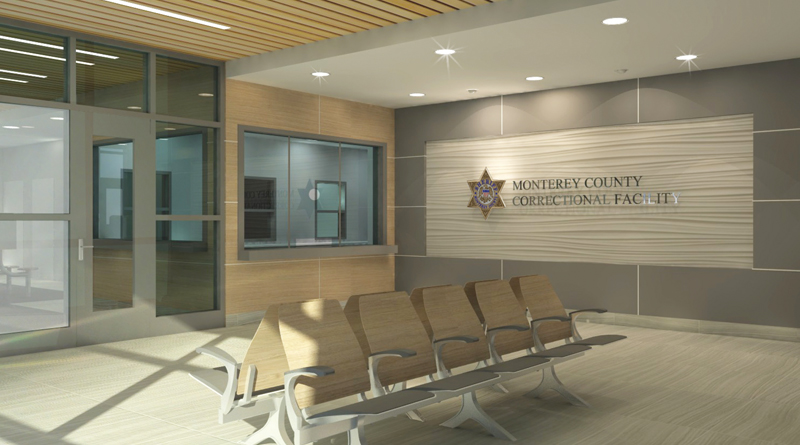 SALINAS, Calif. — For the Monterey County Sheriff’s Office, the math was easy — sacrifice 70 percent of its parking, but gain 570 much-needed beds in the county jail.

Built in the 1970s, the Salinas-based county jail has seen little in the way of addition in the intervening 45 years. The mid-1990s saw some expansion but nothing on the order of the additions that received a groundbreaking ceremony this past September 2017.

The new two-story facility boasts a pair of mezzanines that will offer a greater ability to oversee inmate activity, and the additional beds raise the total jail capacity to about 1,400 inmates. It’s an extensive expansion and like Salinas’ own author John Steinbeck famously opined, “Anything that just costs money is cheap.”

Of course, in Steinbeck’s day, a figure like the $88.9 million budget for the project was practically inconceivable and — to coin a phrase — it ain’t necessarily cheap, but it is the price of the jail upgrades. Sheriff Mike Kanalakis gets the credit for helping obtain the initial $40 million by advocating Assembly Bill 900 for the project in 2009. This was followed in 2012 by then-Assemblyman and current Monterey County Supervisor Luis Alejo, who pushed to secure an additional $40 million in state funding for the project. Monterey County itself topped off the tab with a 10 percent match, which led to the final figure.

The funds will cover the fees of the project’s architect, Sacramento, Calif.-based Lionakis, as well as general contractor Amoroso Construction of Redwood City, Calif. If everything goes to plan, the Monterey County Jail expansion should be completed by the end of 2019.

The projected deadline is relatively soon given the decades-long interest in such an expansion. Among those pushing for the project were former sheriffs in Monterey County who long held a vision for a more modernized county jail.

“Building in California with state money is not easy and it does not happen quickly,” said Capt. Jim Bass of the Custodian Operations Bureau of the Monterey County Sheriff’s Office. “The different layers of approval at the local and state levels for each area can be overwhelming, and we got bogged down a couple of times but were able to push through. We had some design changes early on that slowed us down as well. We were initially awarded half of our $80 million request and moved forward only to learn later that we were awarded the other half after another county had returned their award.”

The wait seems worth it for all concerned. The design of the new facility reflects the county’s focus on rehabilitation and long-term care with programs such as anger management and job development classes soon to join existing programs. Likewise, the expansion changes the jail’s “dorm-style” housing units to two-person cells. What precipitated the switch?

“More than anything it was the change in our inmate clientele. We went from housing a majority of misdemeanor inmates to not only felons, but many who have prison backgrounds and tended to be more violent as well,” said Bass. “In an open dorm-style housing environment, the options our deputies have in dealing with problematic inmates really came down to removing them from the housing unit for a ‘time out’ or removing them completely. Whereas the two-man cells allows more flexibility for dealing with these inmates within their housing unit, keeping them in an environment they are already comfortable in.”

To that end, myriad support facilities distributed throughout the original footprint will instead have their own space for programming; ditto medical exam rooms and yards attached to the individual units.

Much of this new design is intended to support the jail’s rehabilitative efforts — not to mention the safety of both inmates and staff.

“The new design will provide program space for every housing unit — 10 rooms for eight units — in the expansion project, in comparison to our current design, which has five to six spaces for 30 units. This will give us the ability to provide a lot more programming,” explained Bass. “Our programs unit is already starting to expand our offerings in preparation for the opening in a couple of years. The program space is one of a number of features in the new expansion project that we hope will give the inmates in our facility a better experience while they are here and thus reduce tensions that lead to violence.”