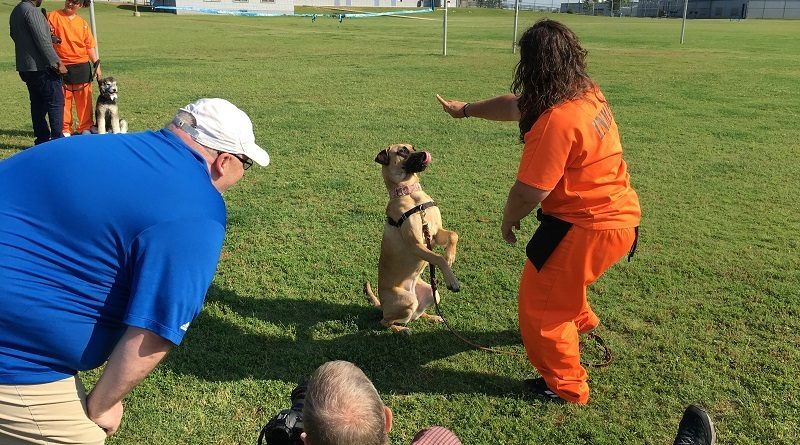 MCLOUD, Okla. – On May 29, The Oklahoma Department of Corrections (ODOC) conducted a ribbon-cutting ceremony for its Serelda Cody Dog Training Facility, inside its Mabel Bassett Correctional Center (MBCC) in McLoud.

The event unveiled a nearly 3,000-square-foot kennel that will expand the medium-security prison for the women’s Guardian Angels Program. The facility is the result of a statewide partnership between ODOC and CareerTech.

“The Serelda Cody Dog Training Facility is a product of our incredible partnership with CareerTech and other volunteers,” ODOC Director Joe M. Allbaugh said in a statement. “It symbolizes our shared commitment to return a better individual to society. Quite frankly, we couldn’t do it without them.”

CareerTech instructors teamed with the dog program’s inmates to construct the kennel, helping them obtain crucial construction skills they can use after re-entry. The nonprofit Friends for Folks, which also hosts a Guardian Angels-like program at Lexington Correctional Center, also helped with the facility.

While construction originally started in 2014, delays pushed the building’s completion back to this year. The new building gives trainers a central location to take courses in learning how to train and groom dogs, with 10 indoor/outdoor kennels, a grooming area with equipment and a washer and dryer to keep bedding and towels clean.  The structure also boasts an enclosed exercise yard with agility equipment and a walking path for the handlers and dogs.

The Guardian Angels Program, in which 17 inmates participate, connects with area animal rescue groups to match dogs with inmates — who then train the animals before adoption. Rescued dogs reside with the inmates for several weeks; inmates train the animals, teach commands and groom them, preparing them sufficiently for placement into good homes. Inmates can also train them for owners that have special needs, such as someone needing a service animal or a home that has elderly residents.

The dogs are spayed or neutered, and receive veterinary care as needed before adoption. Since the program launched at MBCC in 2014, it has placed 123 dogs, with 11 currently taking part.