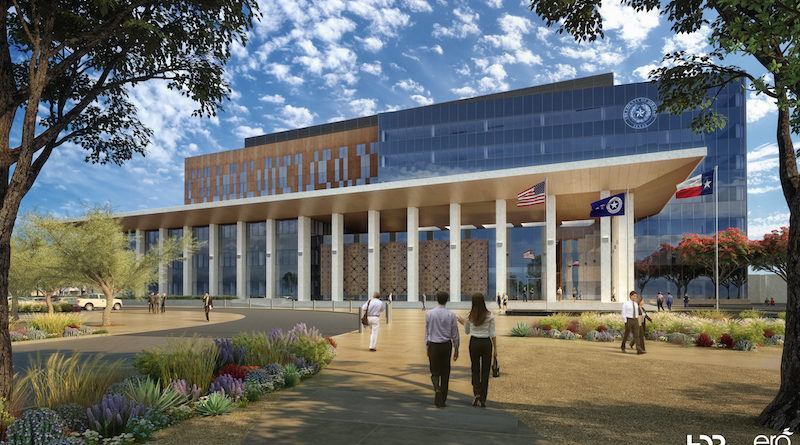 A rendering illustrates an exterior view of the Hidalgo County Courthouse, set to begin construction this autumn. Photo Credit: HDR and ERO

EDINBURG, Texas – Construction of Hidalgo County’s new courthouse and jail expansion is expected to begin in September, with an official groundbreaking ceremony scheduled for early October.

The project scope reads that the “County of Hidalgo, Texas is developing a replacement courthouse with three goals: (1) Replace the aged existing courthouse; (2) Address growth demands of County and State District Courts; and (3) Improve efficiencies and security.”

HDR partnered with ERO as the judicial consultant for the design of the new courthouse.

Jacobs Project Management Co. has signed on as project manager.

Morganti Texas, Inc. serves as the project’s “construction manager at risk” whose job, according to KRGV.com, is to work with the architect on finalizing plans to move forward with the project as construction begins.

The new courthouse is expected to be over 300,000 square feet and six or seven stories high, with about 30 courtrooms, and District and County Clerk’s offices.

According to HDR’s website, the project will also include a central utility plant planned within a separate building on the site, a single security screening area, secure parking for judges and elected officials, along with a loading dock area, parking and a food court for the public and staff.

Additionally, the jail addition and expansion portion of the project adds 1,000 beds to the jail.

According to KRGV.com, the courthouse is scheduled to be complete by 2021, and will be located on the southeast corner of the area where the current courthouse stands.

A report from KRGV.com contributed to this report, along with information from HDR and Hidalgo County websites.