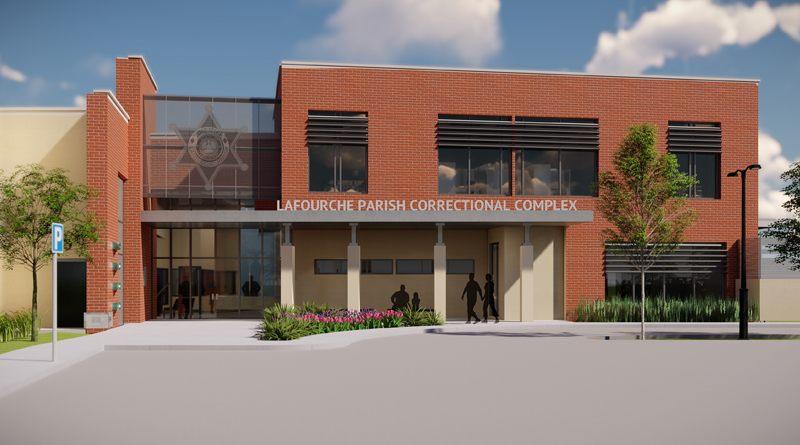 The $40 million, 127,000-square-foot facility will have the ability to house 600 inmates. Photo Credit: Lt. Brennan Matherne.

The $40 million, 127,000-square-foot facility will have the capacity to house 600 inmates and will function as a “direct-supervision facility,” allowing the officers to interact and work with inmates. The design also incorporates energy-saving aspects such as ample natural daylight.

The existing facility was constructed in 1976 with a capacity of 68-beds and later enlarged in 1979 with an additional 58-beds for a total capacity of 126 inmates. After 42 years, the building has experienced numerous mechanical and technical problems without any of the necessary parts of the jail system available, prompting for a much-needed revamp of the building.

The original detention center is also designed with the antiquated Block design where officers must make routine rounds due to inadequate security cameras in the facility. There is only one multi-purpose area that serves as a library, programming room and any other need that may arise.

In essence, the original facility lacked space for what the inmates and staff needed.

The goal of the project was to not only create a larger detention center, but to also inspire a new vision for corrections in Louisiana.

Sheriff Craig Webre has made his own efforts to reform criminal justice in the state of Louisiana over the past several years – seizing this project as an opportunity to put that reform into motion – beginning the moment the offender is arrested.

“The research has shown that direct supervision is a much more effective model that reduces assaults on guards and inmates and has a better outcome for behavior management,” said Webre. “It will offer us a once in a lifetime opportunity to affect the future of corrections and quality of life for the citizens we serve for the next century.”

Furthermore, the new detention center will offer a Transitional Work Program. Through this program, the office has partnered with the Louisiana Department of Corrections to allow convicted felons with four years left on their sentences to participate.

The program gives inmates the opportunity to become employed as well as providing assistance in preparing for reentry. Those inmates are housed at a facility in Raceland, La., which uses direct supervision throughout the facility.

While the existing jail is probably one of the last to use the antiquated block design, this facility is on the cutting edge with what is considered to be the most effective modern jail design.

This project is one of the first in Louisiana to use the Construction Manager at Risk style of construction versus the design/bid/build process. Yates Construction of Philadelphia, Miss., is the contractor while GraceHebert Architects of Baton Rouge, La., has partnered with local architects Duplantis Design Group of Thibodaux for the design.

The grand opening ceremony of the Lafourche Parish Detention Center is planned for Nov. 28, 2018, with December 1 being the date they will begin transferring inmates.

“This has been a dream in the making now for four years. With that comes the opportunity for us to fully invest and implement the prisoner reentry initiatives and evidence-based practices,” said Webre.