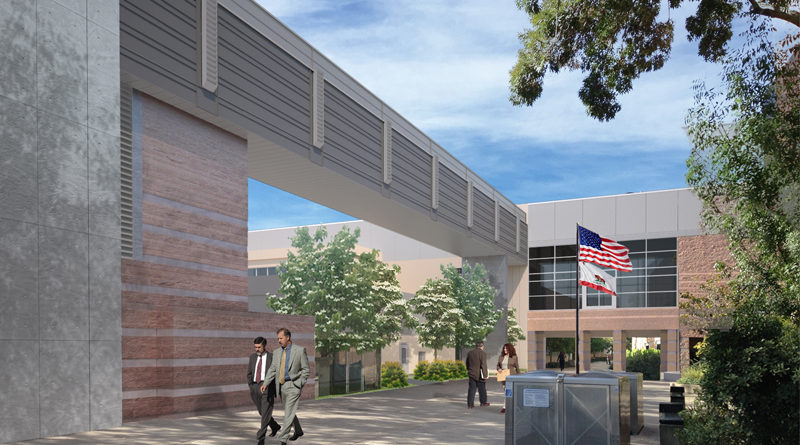 Sonoma County is preparing to build a Secure Inmate Transfer Connector for a new courthouse to be constructed by the state of California. Photo Credit: Ross Drulis Cusenbery Architecture.

SANTA ROSA, Calif. — Sonoma County will break ground in October on the tunnel portion of a Secure Inmate Transfer Connector that will allow for the transfer of inmates to and from a new criminal courthouse that will be built by the state.

The estimated $7 million dollar structure will connect the third level of the Main Adult Detention Facility to the basement level of the new courthouse and will consist of three elements: a 135’ bridge, a 47’ high elevator and stair tower and 218’ subterranean passage tunnel.

According to Brianne McClure, senior communications manager for the county’s General Services department, the project will be broken into two phases, with phase one beginning with the construction of the new state courthouse.

“The state will start building the courthouse first,” said McClure. “We have to build the underground tunnel before they develop the rest of the building.”

Novato-based Thompson Builders Corp. was awarded the Secure Inmate Transfer Connector project, and their designer Arrington Watkins Architects will complete the design for permit submission. Thompson Builders will construct the project with the county, and Sonoma-based firm Ross Drulis Cusenbery Architecture is overseeing the project.

According to The Press Democrat, the tunnel portion of the project will be the first tangible sign that Sonoma County may get a new courthouse, a stalled project restarted earlier this year when Gov. Jerry Brown secured state funding to replace the state’s most outdated and seismically dangerous courthouses.

Construction on Sonoma County’s $175 million six-story courthouse is reportedly scheduled to begin sometime next year on a 6.8-acre site next to the current 52-year-old facility.

The state is reportedly funding the new courthouse while the county will be responsible for funding the Secure Inmate Transfer Connector that will allow a way for inmates to securely travel between the jail and new courthouse as opposed to open public spaces.

The Press Democrat reports that the connection project was designed to handle daily traffic of between 150 and 180 inmates who are escorted between the main jail to the court.

Inmates will reportedly walk across a bridge from the jail’s third floor to an elevator tower. The elevator tower will bring inmates below ground to a tunnel that connects to a lower level of the new state courthouse, according to the design plans.

According to The Press Democrat, the project architects for the courthouse are a Los Angeles-based team from Richard Meier & Partners, the firm that designed the Getty Center in Los Angeles, the Barcelona Museum of Contemporary Art and a federal courthouse in San Diego.

A report from The Press Democrat contributed to this story.