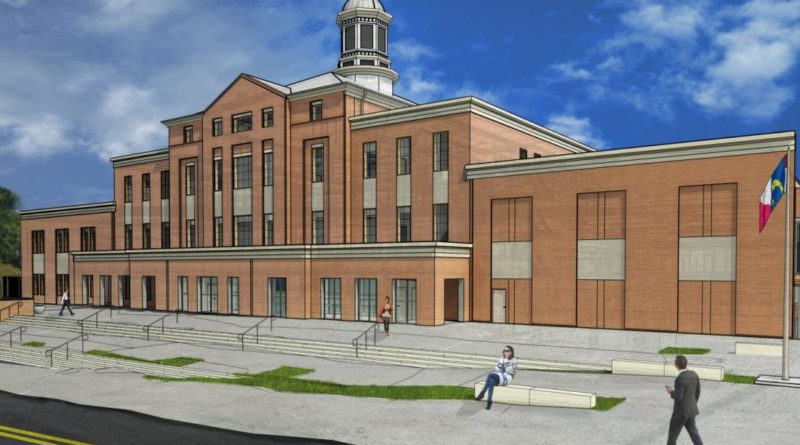 Designed by Raleigh, N.C.-based architecture and planning firm Smith Sinnett Architecture, the Onslow County Courthouse expansion is a new three-story building expansion of approximately 60,000 square feet with a mechanical penthouse located within the gable roof and a 12,750-square-foot renovation to the existing facilities.

The Daily News reports that the new courthouse began construction in 2016 and is scheduled to open in 2019.

Although damage to the new courthouse was minimal, the former courthouse nearby, also known as the E.W. Summersill courthouse, reportedly suffered serious flooding.

According to the county’s Clerk of Court Lisa Brown, water inside the old courthouse reportedly rose to 1.5 feet and the ceiling of an upstairs courtroom reportedly fell in above its jury box.

“Thankfully my staff was prepared and moved our files from the bottom shelf,” said Brown to The Daily News. “None of our equipment and none of our files were destroyed, but furniture is of course destroyed.”

Brown reportedly said the only damages noted in the new courthouse included some windows seeping water because they had not been caulked completely yet. She reportedly said water from New River did not make it up to the staircase or inside the new building.

“They built it (the new courthouse) several feet above Summersill so no water came in,” said Brown to The Daily News.

Onslow County Manager David Cotton reportedly wrote in an email to The Daily News before Hurricane Florence that the project is on track and the courthouse is still expected to open in the first quarter of 2019.

The Daily News reports that renovations to the E.W. Summersill courthouse will begin after district court staff move into the new courthouse between November and January; renovations at Summersill are reportedly expected to take up to 10 months.

“I’m kind of not looking forward to that month,” Brown joked to The Daily News, adding the civil division and cashiers will have to work in a temporary space until the Summersill renovations are complete.

Asset and Facility Management Director Randy Jones reportedly said equipment and furnishings are scheduled to move into the building sometime over the next two months, but the building will have to be up to code before employees can officially move in.

The Daily News reports that the Onslow County Register of Deeds, district court clerks, and the district attorney’s office will all move to the new courthouse.

“The court system will be a lot more convenient for the public once (it is) housed in the same building,” said Brown to The Daily News.

According to The Daily News, the criminal and civil division is currently split up between the Summersill courthouse and Onslow Superior Courthouse. The new set-up will reportedly bring the criminal division to one place and make for a smoother experience in court.

A report from The Daily News contributed to this story.