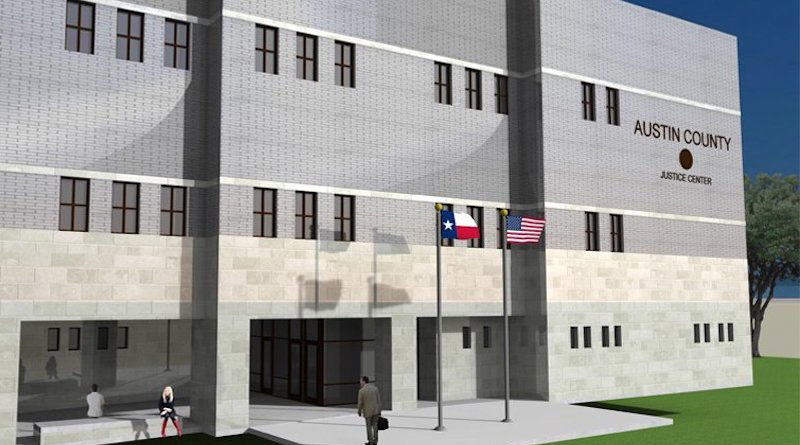 Austin County’s new justice center will enter the design phase in February and will include an EMS station and jail. Photo Credit: Burns Architecture, LLC

BELLVILLE, Texas — Austin County’s planned justice center, which will include an EMS station and jail, will reportedly begin its design phase in February with construction to start in about a year, according to The Sealy News.

Austin County voters reportedly approved a $17 million bond issue for the justice center in November. According to The Sealy News, the county plans to refinance 2009 bonds and pay out reserves to cover needed repairs and new construction for the jail and EMS facility, for which about $9.5 million is reportedly budgeted.

Judge Lapham reportedly invited representatives from AG/CM and ECM International to present pitches as to why they should oversee the county projects. Rockport-based architecture firm Burns Architecture, LLC completed the design work for the project.

According to Austin County News Online, Burns Architecture was asked to begin gathering information on a solution to solve problems with the county’s current aging courthouse and with a possible new justice center.  The result of the study was to reportedly create a facility that would encompass the needs of the jail and the courthouse in one multi-level facility.  Burns Architecture, LLC reportedly sent a questionnaire to the county’s departments to determine their needs.  As the questionnaires were returned and interviews with heads of departments and staff were conducted, the justice center reportedly began to take shape.

According to Austin County News Online, the new facility will include a large parking area that Burns Architecture designed to accommodate about 200 parking spaces for the public and an additional 100 spaces for all Austin County staff and Sheriff’s Department vehicles with staff parking being separated by a fence and gates.  There would also reportedly need to be a large detention pond for drainage.

The first floor would reportedly house the jail, sheriff’s office and a large lobby with public elevators and restrooms.  There would also reportedly be a separate elevator to safely bring prisoners to the courtrooms without interfacing with the public. A large covered area in the front of the building where the building overhangs with concrete columns and benches will reportedly allow for more square footage in the upper floors.  Benches also reportedly serve the dual function of being places for people to sit as well as barriers, so a vehicle could not be used to ram into the front of the building.

A report from The Sealy News and Austin County News Online contributed to this story.