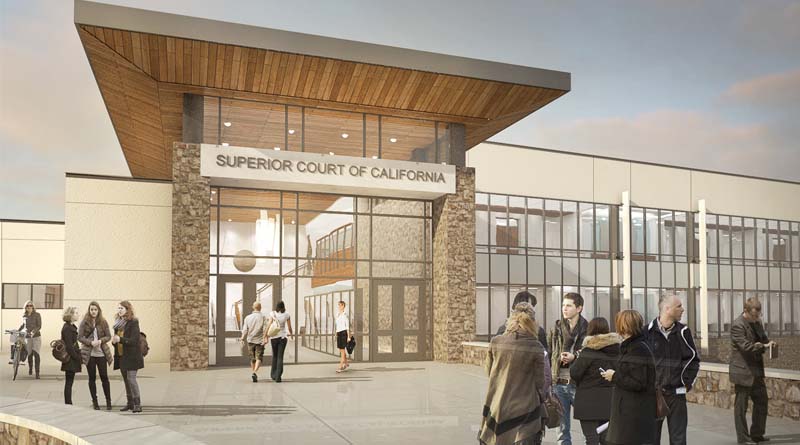 The 61,000-square-foot building will be built on a 4.3-acre parcel. Photo Credit: Lionakis

SONORA, Calif.—Construction on the new $51 million Tuolumne County Courthouse in Sonora remains well underway with the project slated for completion in late 2020.

The 61,000-square-foot building will be built on a 4.3-acre parcel at the county’s future Law and Justice Center off Old Wards Ferry Road in Sonora.

Turner Construction is the general contractor on the project, and Lionakis is the architect. Funding for this project comes from a 2008 law that set aside up to $5 billion in lease-revenue bonds to finance new courthouse construction and renovation projects across California.

As part of the County’s Law and Justice Center, this new courthouse will include five courtrooms, courts clerks and administration space, family court services and in-custody facilities. This new building will provide a much-needed replacement from the existing county courthouse that was built in 1898.

The new building will consolidate operations from two existing courthouses at 41 W. Yaney Ave. and 60 N. Washington St., which have been described as overcrowded, physically deficient and significantly lacking in security features to the current standards. The original buildings also lack holding cells for in-custody inmates.

“This is not a modern facility,” explains Doug Segerstrom, who is the presiding judge for Tuolumne County Superior Court.

“It’s not designed to be safe for the public who comes here, the witnesses, or defendants. There’s a huge laundry list of reasons why we need a new courthouse.”

Both courtrooms in the Washington Street courthouse are at the end of a narrow hallway that everyone must walk through, making it difficult to prevent victims, witnesses and defendants from crossing paths. Additionally, people must climb three steep flights of marble stairs to reach the main courtroom in the Yaney Avenue courthouse.

The new courthouse will have two stories in addition to a lower level. Other new features—not provided at the existing courthouses due to space limitations—include in-custody holding cells, a self-help center, family court mediation and witness waiting rooms.

While the state will cover the cost of building this new facility, upgrading its electronic case-management systems—to the tune of approximately $38,000— is the individual court’s responsibility.

The Tuolumne County Superior Court uses an outdated system that doesn’t allow for electronic filing or transferring electronic data among other agencies, such as the District Attorney’s Office, Public Defender’s Office and California Department of Corrections and Rehabilitation.

“Obviously, that is not enough to purchase a sophisticated case-management system with the requirements of the court,” says Segerstrom.

He adds that Tuolumne County and the approximately eight other superior courts that use the same system are working with the Judicial Council of California’s Technology Advisory Committee to determine how they can upgrade to modern systems.