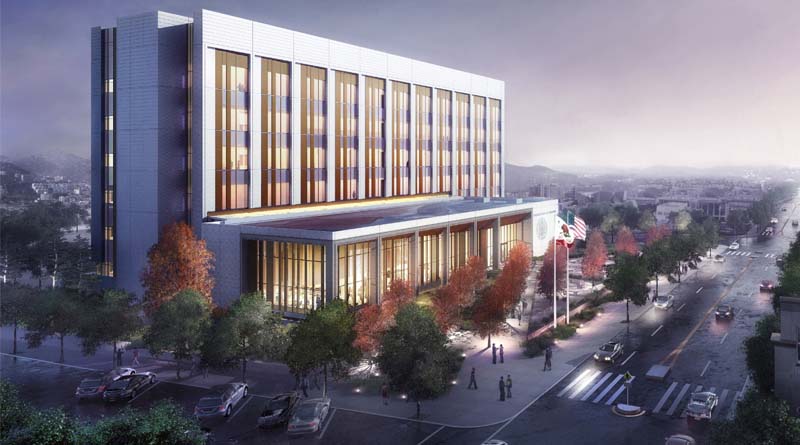 REDDING, Calif.—Currently under construction, the new Shasta County Courthouse in Redding remains on track for a completion date of Spring 2021.

The $173 million project involves replacing the Main Courthouse in Redding with a new building that will span 166,887 square feet and include 14 courtrooms. The architect on the project is NBBJ and the general contractor is Sundt Construction.

There is definitely a need for a new courthouse. The Superior Court of Shasta County provides court services from three facilities in downtown Redding. The Main Courthouse and Annex—built in 1956 and 1965, respectively—handles a full range of court cases, including civil, family law, dependency, probate, traffic and small claims.

The court shares the building with several County agencies, and all jury trials are held in this facility. The Justice Center is directly adjacent to the Main Courthouse and is used primarily for felony matters—from arraignments through setting trial dates.

The Juvenile Court, located three miles south of the main courthouse, handles juvenile delinquency cases and is located inside the County’s juvenile detention facility. All three facilities are unsafe, overcrowded, have numerous physical problems and significant security and accessibility issues, limiting access to justice for Shasta County residents. Examples of this include:

“All adult and juvenile court operations will be consolidated in a single location, and two additional courtrooms will support new judgeships.”

The new courthouse will be located directly across Court Street from the current courthouse. The City of Redding and Shasta County worked with the Judicial Council on acquisition of an approximately two-acre site—bounded by Butte, Oregon, Yuba and Courts streets in downtown Redding. In June 2011, the Shasta Board of Supervisors approved the $2.5 million sales, which also involved an equity exchange for the court’s space in the current courthouse.

In terms of funding, the courthouse was ranked as an “immediate need” in the judicial branch’s capital-outlay plan, making it among the branch’s highest-priority infrastructure projects.

“Senate Bill 1407 created the initial funding stream for the project. Enacted in 2008, the bill provided up to $5 billion in bond funding for new and renovated courthouses using court fees, penalties and assessments,” says Corren.

The building has been designed with attention to sustainability. It will provide basic services not currently offered to county residents due to the limited space in the new current court facilities.

“The new courthouse essentially increase efficiency by consolidating all court operations under one roof in a modern and secure building,” adds Corren.

When completed, the project is expected to qualify it for a LEED Silver certification by the U.S. Green Building Council.

Once the Court vacates the old Main Courthouse and Annex, the County will then determine w what do to with the vacated space of not just this building, but the Justice Center, and the Juvenile Court as well.