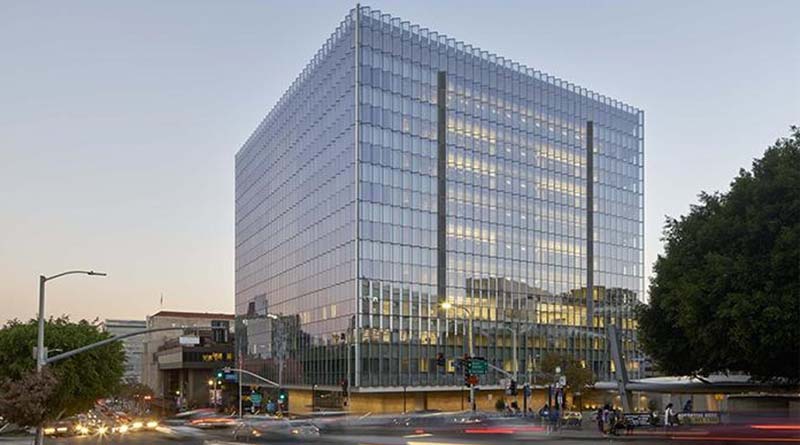 LOS ANGELES—The American Institute of Architects (AIA) recently announced the recipients of the 2019 Institute Honor Awards. The annual program recognizes excellence and distinction in architecture, urban design, and interior architecture. One of the winning projects is the United States Courthouse in downtown Los Angeles.

Completed in 2016, Skidmore, Owings & Merrill LLP (SOM) designed and engineered the federal United States Courthouse, which is both modern in spirit and rooted in classic principles of federal architecture. The general contractor on this project was Clark Construction.

Clark constructed the 600,000-square-foot court building for the General Services Administration (GSA). Referred to as the “Cube” because of its shape, the new facility features 24 courtrooms and 32 justice chambers. The sloped site has a 27-foot grade change from the highest to lowest point.

A sky lit central courtyard provides natural light and circulation to the building’s interior spaces. The Cube is anchored by two levels of below-grade parking, as well as mechanical and back-of-house spaces.

The new courthouse has a unique design that addressed the Federal Government’s blast and setback requirements. Clark constructed a structural frame for the Cube that sits back an entire bay around the first floor, providing for 36 additional feet of setback on each side of the building perimeter.

The courthouse design also mitigates blast threats by using a novel truss system to increase the standoff between the perimeter and primary structure, while still allowing the cube to appear as a single, hovering form. To protect against seismic events and control the building’s lateral drift, the roof truss is used as a mega link beam that connects the reinforced concrete shear walls at the top story and reduces ductility demands.

Rising 10 stories, it is located on a prominent site in the city’s Civic Center neighborhood, near the Walt Disney Concert Hall. It houses the U.S. District Court of the Central District of California, accommodates the needs of the U.S. Marshals Service, and provides trial preparation space for the U.S. Attorney’s Office and Federal Public Defender.

“It uses traditional architectural elements such as processional steps, grand public spaces, and enduring materials like limestone to achieve a strong civic identity,” said SOM in a project description.

Sustainability was a driving factor for this project from the beginning. It achieved LEED® Platinum certification and meets the GSA’s 2020 energy objective. The building incorporates a variety of sustainable design features, including a rooftop photovoltaic array that is intended to generate 507,000 kWh of renewable energy on an annual basis.

Among the facility’s sustainable elements is a combined cooling, heating, and power plant (CCHP) or “Tri-Gen” system. The electrical system includes two 5,000-Amp substations and a 2500kW diesel generator for emergency power.

Additionally, the building envelope features a high-performance faceted curtain wall façade. This system gives the courthouse a lively expression that changes throughout the day; it also will reduce radiant heat input through the building envelope and provides ample natural light to internal courtrooms and common areas. The project also includes a 52,000 square-foot, 400 kW photovoltaic array at the roof.

The project is convertible to using biomass materials in the future so that it can one day reach net-zero energy.

A key challenge for the design team was to manage intense sun exposure from the east and west, while maintaining the building’s alignment with the street grid. SOM’s pleated facade design incorporates opaque panels in east- and west-facing pleats to minimize solar thermal gain.