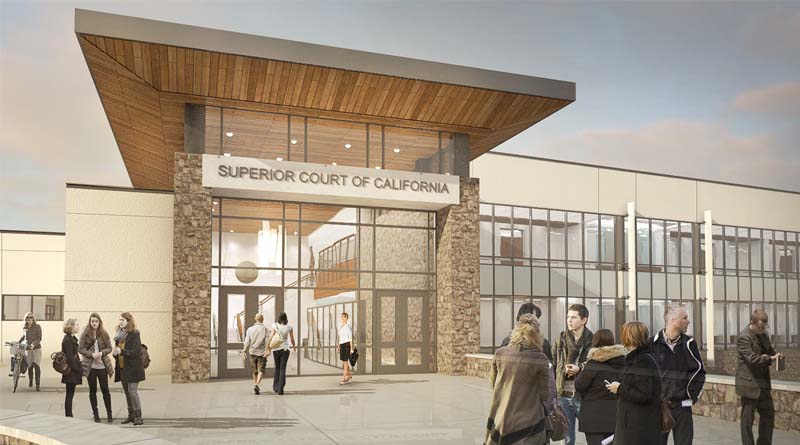 Construction began earlier this year on the $51-million project, but the official groundbreaking was postponed due to inclement weather. The event’s keynote speaker, the Presiding Judge Donald Segerstrom, Tuolumne County Superior Court, spoke about the Court’s long-pressing need for a new facility. The current courthouse was built in 1898.

“We’ve had to make do with an old and physically deficient facility for so many years now. A new courthouse will allow us to provide access to justice services in a safe and secure manner.”

The approximately 61,000-square-foot building is being built on a 4.3-acre parcel at the County’s Law and Justice Campus and will consolidate operations from two existing courthouses. The facility will include five courtrooms, administration space, family court services, and in-custody facilities. The new courthouse will have two stories, in addition to a lower level.

Funding for this project comes from a 2008 law that set aside up to $5 billion in lease-revenue bonds to finance new courthouse construction and renovation projects across California. The new building will consolidate operations from two existing courthouses at 41 W. Yaney Ave. and 60 N. Washington St., which have been described as overcrowded, physically deficient and significantly lacking in security features to the current standards. The original buildings also lack holding cells for in-custody inmates.

“The Tuolumne County Court and the Judicial Council of California have shown a tremendous amount of patience throughout this project,” said Lionakis Project Architect Jake Elliot.

“Once complete, this project will have been ongoing for over 10 years. Having witnessed many of the shortcomings of the existing historic courthouse, it always amazes me how patient the team has been while waiting for their new home. It’s not every day you find a team willing to stay the course and maintain a consistent design intent for over decade.

Slated for completion in March 2021, the new courthouse was designed to meet LEED Silver Certification requirements.