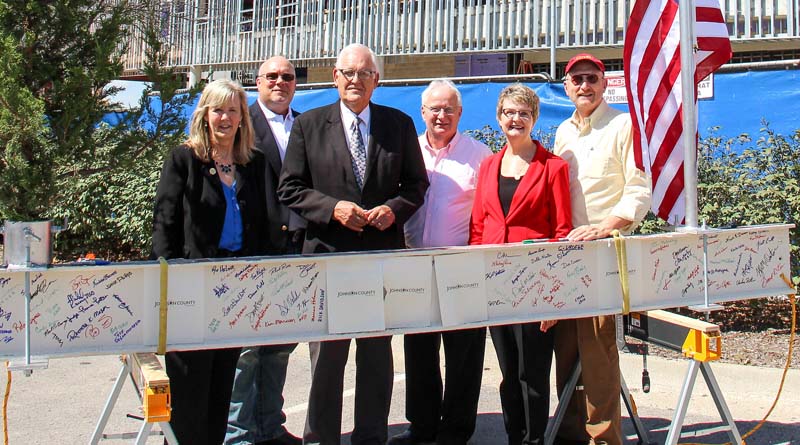 A topping out ceremony was held in August for the new Jackson County Courthouse in Olathe, Kan. Photo Credit: Johnson County, Kansas

The new courthouse—which is slated to be completed by August 2020 and open for business in early 2021—is being built across Santa Fe Street north of the existing courthouse and west of Olathe City Hall.

The anticipated cost is of the seven-story project is $182 million ($193 million with inflation costs factored in). The general contractor is JE Dunn Construction and the project architect is TreanorHL & Fentress Architects.

The project, located at 150 W. Santa Fe Street, is on budget and overall construction progress remains on schedule. Crews are currently working on the concrete structure and roof deck while exterior building materials are being installed.

JE Dunn’s topping out ceremony took place in August, which celebrated the milestone of construction reaching full height. The last steel beam was raised 238 feet to the courthouse’s highest point in its structural framing. The time-honored tradition signals the completion of a high-rise building’s structural framing. The event was attended by officials from Johnson County Government, City of Olathe; JE Dunn Construction; and other dignitaries.

The new courthouse will address issues of concern for the community and residents such as:

The courthouse will meet Johnson County’s judicial needs for more than 75 years as the county expects to add 10,000 residents each year. The design allows for more courtrooms later as needed.